Director Paul Feig had been teasing us with photos from the upcoming reboot of the Ghostbusters releasing next summer. First there were the updated suits, their proton packs, their Ecto - 1 ride and finally, here is it, the official cast photo with the hashtag #whoyougonnacall. Uhm, the Ghostbusters, amirite?

Actresses Leslie Jones, Melissa McCarthy, Kirsten Wiig and Kate McKinnon look absolutely badass posed in front of the Ecto - 1 with that iconic logo in the middle. 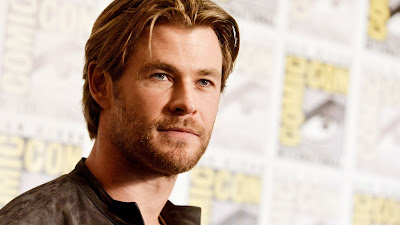 There is one cast member who is missing from this photo and that's the Ghostbusters' receptionist played by Thor himself, Chris Hemsworth. Annie Potts was the receptionist in the 1984 version. I personally love this bit of casting and Feig's prior track record with ensemble casts could show us another side to Hemsworth's as yet untapped comedic abilities.

The film, which is currently being shot in Boston this month, will release on July 22, 2016. Are you already humming the Ghostbusters song? Who you gonna call?
Posted by Sonal at 11:39 PM