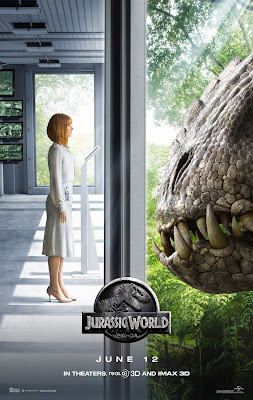 22 years after Jurassic Park (1993) stormed its way into theatres, Jurassic World, the fourth in this gigantic franchise, is well on its way to make movie history itself. A new generation is experiencing the dino-mania that gripped the 90s when Stephen Spielberg and the talent team of VFX and animatronic artists showed us the forgotten world of dinosaurs. This time around, the whole experience feels a tad commercialised as we head back to dinosaur land in Jurassic World.

It was the dearly departed John Hammond's (the late Richard Attenborough) wish that the park be up and running at its finest for the public. In Jurassic World, it's all running smoothly until the newest attraction decides she's had enough of waiting in the wings for her big debut. Young brothers Gray (Ty Simpkins) and Zach (Nick Robinson) are our eyes and ears as we travel to Jurassic World for the first time. Their aunt Claire (Bryce Dallas Howard) is the head of operations at the park and they've got an all-access pass to the park.

The introduction to the park via the brothers is breathtaking and very real. Gray's infectiousness at wanting to visit everything at the park is heady. It's Disney World meets Universal Studios with vicious prehistoric creatures. But everything here is treated as a commercial enterprise so there's a petting zoo with baby dinosaurs, a Sea World-esque splash zone where the mosasaurus eats a large shark like it's an appetizer (a not-so subtle ode to Spielberg's Jaws) and a gyrosphere which allows you to roam amongst the apatosaurus and the stegosaurus. I sorely missed Dr. Ian Malcolm (Jeff Goldblum), from the first two films, who would have never allowed this to happen, he would have been the first to point out there's a looming disaster in the wings.

As a substitute, we have Owen Grady (Chris Pratt), the former Navy man turned Velociraptor wrangler, who believes that the dinosaurs aren't just park attractions but animals with a mind of their own. He leads the raptor pack (featuring Blue, Charlie, Delta and Echo) who've established a bond with him. When Jurassic World's latest dinosaur, Indominus Rex, outsmarts her handlers and escapes her paddock, a exhaustive search and rescue is set upon the island.

Of course, everyone underestimates how smart the dinosaur is. The Indominus Rex is hellbent on a mission to be the last dinosaur standing and the humans are helpless to stop it. Throughout the film, there are flashes of nostalgia with nods to the original Jurassic Park, a destroyed banner on the ground, the old jeep, the scene with the gyrosphere echoing the first encounter with the T-rex and then there are the original dinosaurs who let the Indominus Rex know who's boss. Seeing T-Rex stomp through the park in the climax gave me a big thrill; she's the real lead of the film.

Before the film released, it received a lot of flak for not having a strong feminist character. Howard's Claire started out the film dressed in all white, ran around in heels and according to Grady "has control issues". I'd like to point out that not only does she save Grady's life when he's been attacked by a dimorphodon, she also bravely leads the T-rex to the fight with the Indominus Rex. I guess that's not strong enough for everyone!

The rest of the Jurassic World features some known faces. Jake Johnson from New Girl plays the long-suffering control room support guy Lowery, Vincent D'Onofrio as the InGen representative Hoskins who only sees the dinosaurs as weapons and finally Irrfan Khann as the park's down-to-earth charismatic owner, Simon Masrani; they all stand out in their scenes. Director Trevorrow, in only his second film, was given a mammoth task of reviving a franchise. I really enjoyed his debut film Safety Not Guaranteed and I thought he was a odd choice to helm this film. However, Jurassic World hit all the right points for me as it deeply echoed the first film in the franchise.

The special effects really bring home the whole idea of dinosaur adventure park. You end up wishing for a place where you could canoe down a river or ride a safari amongst the dinosaurs. The final dino-on-dino fight is something else altogether and it's all enhanced by Michael Giacchino's soaring score. Building on John Williams' instantly recognizable Jurassic Park theme, Giacchino gives the thrills and chills of exploring the long-long world. Williams' music still gives me goosebumps to this day.

Jurassic World became the first film to gross $1 billion worldwide in 13 days and edged out the debut record previously held by The Avengers back in 2012 and it's easy to see why. Many of us have a some of kind of fascination with dinosaurs over the years and to see them come to life onscreen is astounding. Jurassic World has replicated the Jurassic Park in spades and it's wonderful to see them on the big screen. Easily the film of the summer!