ACE Awards Presented: The Social Network is back! 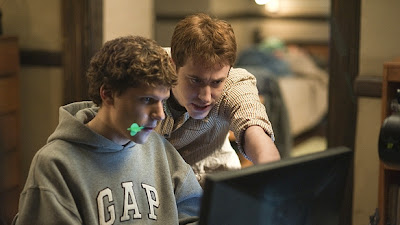 Best Edited Feature, Drama: The Social Network (Angus Wall and Kirk Baxter)
Best Edited Feature Comedy/Musical: Alice in Wonderland (Chris Lebenzon)
Best Edited Animated Feature: Toy Story 3 (Ken Schretzmann and Lee Unkrich)
Best Edited Documentary : Exit Through the Gift Shop (Tom Fulford and Chris King)
I don't know what to say!  This is looking good.  The Social Network won big at the American Cinema Editor (ACE) Eddie Awards winning the one that usually points to Best Picture.  One week to go to Oscar and all signs DO NOT point to a The King's Speech sweep.  There could be a race after all.
Also honored at the event was Christopher Nolan who received the ACE Golden Eddie Filmmaker of the Year award (Yes!) and longtime editor of Steven Spielberg, Michael Kahn was presented a Career Achievement award by Spielberg.  Great stuff.  Congratulations to all the winners!
Posted by Sonal at 7:52 AM