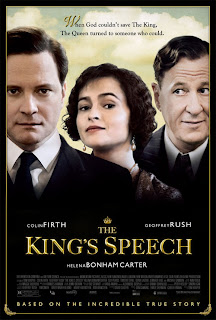 I decided once the ten Best Picture nominees for Oscar were announced that I would try my best to watch them all.  The count is now at 6 with 4 films remaining.  But the one with the biggest buzz right now is The King's Speech which has quickly supplanted the critics' darling The Social Network as the new frontrunner.

So naturally, I had to see the movie to find out what all the fuss was about.  The film is well-acted and yes, emotional but I wasn't moved to applause as most people are claiming they were.  I'm surprised that a period film about the British royal family is somehow more popular than a film about young American entrepreneurs and social networking to which much of America and the world is devoted.

Don't get me wrong, I don't hate the film, I'm not that impressed as everyone is.  Colin Firth, as Prince Albert "Bertie", second in line to the throne, hides and masks the pain he goes through of a stammer and the nervousness of public speaking.  But due to the emergence of the new media of radio at the time, he must fulfill his duty.  On the other end, Bertie's older brother and heir to the throne, Edward, chafes at having to fulfill his duty and wishes to marry his love, an American divorcee, Wallis Simpson.  Bertie, then, knows what he must do.  He must step up and be the man to lead a country on the brink of war.

Of course, he is not alone in this.  His extremely supportive wife, Elizabeth (Helena Bonham-Carter), helps find a speech therapist, Lionel Logue (Geoffrey Rush), who changes the way he approaches his speech impediment.  The film rests on Firth's shoulders and it is because you see how endearing a character he is and how he struggles with the difficult decisions handed down to him due to his station of birth.  He eventually handles it all like a true royal and that is what makes the film tick.  The warm affection shared between husband and wife and the friendship between Logue and Bertie is the key to the film.

I do still think that The Social Network and Inception are better directed but unfortunately the witticisms and the originality of these films hasn't received the recognition it deserves and will be passed over in favor of the The King's Speech.  It is a real shame because The King's Speech is a very good film, just not a great one and certainly not the best film in 2010.  But it is something I'll have to get used to but it doesn't mean I have to like it.