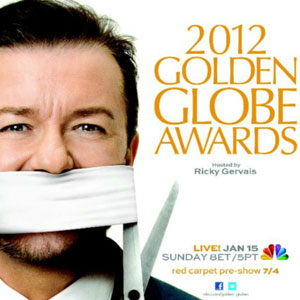 Best Actor in a Drama
George Clooney, The Descendants

Best Actor in a Comedy or Musical
Jean Dujardin, The Artist

Best Actress in a Drama
Meryl Streep, The Iron Lady

Best Actress in a Musical or Comedy
Michelle Williams, My Week with Marilyn

Recap: This was a very odd show, in that, there was no one movie leading the way.  Although with three awards from this night, The Artist can be considered a leader.  There were no real upsets unless you count Meryl Streep winning over Viola Davis.  I think she herself was shocked too.  It was lovely to see the montage of Morgan Freeman's work and think of so many iconic movies he's been in: Glory, Unforgiven, Shawshank Redemption, Driving Miss Daisy and of course playing God in Bruce Almighty.  Since he's Morgan Freeman and can't narrate his own montage, who does he get?  Dame Helen Mirren and Sir Sidney Poitier, very amazing!  Besides this, it seemed a very ho-hum sort of night with the awards being handed out matter of fact.  I was longing for the shows of past years, this one kinda put me to sleep.  So, that's it for this year and now we set our eyes on the Oscars, hopefully it'll be more entertaining with Billy Crystal back as host.
Posted by Sonal at 12:07 PM