So the biggest mystery of the Oscar nominations has been finally revealed...how many movies will compete for Best Picture?  Here's a full rundown and reaction to the 2012 Oscar nominations. 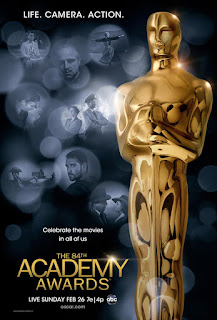 My take: Nine nominees in the end, then.  From 5 to 10 any number of movies could have been nominated and 9 is such a tease.  For the 10th picture that could have been, like Bridesmaids and Harry Potter, it does feel like some darn bad luck.  There are some definite surprises here with Extremely Loud & Incredibly Close and The Tree of Life making the cut.  But the biggest surprise? Hugo leads The Artist in more nominations, 11 in all to its 10.  Could this be a real Oscar race now?

My take: I didn't expect to see Terrence Malick's name up there and was instead thinking of David Fincher (The Girl with the Dragon Tattoo) or Steven Spielberg (War Horse) to eke through.  Which goes to show you, there are people out there that really did like The Tree of Life.  I need to see this movie, stat!

My take: Two surprise nominees, Demian Bichir and Gary Oldman (this is his first nomination, can you believe it?) made sure that Michael Fassbender (Shame), Leonardo DiCaprio (J. Edgar), and Ryan Gosling (The Ides of March, Drive) were all denied a nomination this year.  But hey, they're all young and we can say that we might see them nominated in the future.

My take: I think in this category all the usual suspects who were supposed to be present are all there although both Tilda Swinton (We Need to Talk about Kevin) and Kirsten Wiig (Bridesmaids) might have featured on some ballot lists.

My take: Ladies and gentlemen, Jonah Hill is an Oscar nominee.  How crazy is that?  He always makes me laugh, his line delivery is perfectly pitched in every movie.  However, this category is all about the old-timers, Christopher Plummer and Max von Sydow.  Better late than never, huh?

My take: Congratulations to all the ladies in this category but truly it's Octavia Spencer vs. Melissa McCarthy here.  And the question will remain, can comedy score over drama?  I loved both their performances so I'm very torn.

My take: The Adventures of Tintin not getting a nomination is a big snub here being that it just won at the Golden Globes and the Producer's Guild Awards.  I'm glad besides the big studio films making the list, two very different animation genre films like A Cat in Paris and Chico & Rita are showcased.  Congratulations to Dreamworks Animation on their two nominations for Puss in Boots and Kung Fu Panda 2.  This really could become an open category for any film.

My take: Harry Potter got its one of three nominations in where I'd hoped to see it recognized and I do wish it wins this year.  Stuart Craig has been working in that world for over a decade.  Although, any of the best picture nominees could solidify their frontrunner position with a win here.

My take: So glad to see War Horse make it through for a nomination.  Every shot in that film looks gorgeous photographed.  Same goes for The Tree of Life.

My take: Alexander Payne has won in this category before and it's safe to say he's the frontrunner here again.  Hugo scored a surprise nomination here too.  Things are looking up for the film's chances.

My take: Two more surprises in this category, the very well-made Margin Call and A Separation making it through.  I do feel Woody Allen is the one to beat but there can always be an upset.  Congratulations to Mumolo and Wiig, the lone female nominees from the bigwig categories.  I was looking to see Diablo Cody get nominated again for Young Adult.

My take: A nomination here greatly increases a film chance's at winning at Best Picture and it's all the big names here.  I am hoping Schoonmaker, Scorsese's longtime editor, wins again.  I'm biased.

My take: Ah, the sound categories, if you don't get this right on Oscar night, it really does screw you up on the Oscar pool.  And usually, the same film wins both categories!  Chose wisely.  Things are not looking good for Drive's lone nomination then.

My take: See above.  Although, Moneyball is the odd man out this time around.

My take: Jane Eyre got a nomination! As did W.E.?  I had really hoped to see Harry Potter score here and I'm really surprised to see that Midnight in Paris didn't feature here.  The setting, the look, and the costumes really did set the mood for 1920s Paris.

My take: Congrats to the rest of the nominees but who are we kidding? A Separation has this locked.

My take: Rise of the Planet of the Apes cannot lose this.  Kudos the rest of the nominees on their amazing and hard work to make it all seem so effortless but this was year of Caesar.  Believe me, I would have loved for the wizards from Hogwarts to finally win at something.

My take: Only 3 nominees? Though I have sneaking suspicion that The Iron Lady will emerge victorious here, you can hardly recognize Meryl Streep; it's like she really did become Margaret Thatcher.

My take: Oh, no, John Williams!  It's never good for double nominees, they always cancel themselves out.  Ludovic Bource and his charming French accent might make it up the stage for The Artist.

My take: While I'm happy for the nominees, why do they even bother with this category?  The most random people are Oscar winners for this category.  That being said, you know what this means, right? Kermit and Miss Piggy are going to the Oscars!!

Documentary Feature
Hell and Back Again
If a Tree Falls: A Story of the Earth Liberation Front
Paradise Lost 3: Purgatory
Pina
Undefeated

Documentary Short Subject
The Barber of Birmingham: Foot Soldier of the Civil Rights Movement
God is  the Bigger Elvis
Incident in New Baghdad
Saving Face
The Tsunami and the Cherry Blossom

And that's it, folks!  While many of my favorites did not make this time, there's always next year and the year after that.  That's what you have to keep telling yourself.   The awards will be handed out on February 26th, 2012  and the show will be hosted by Billy Crystal.  See you there!
Posted by Sonal at 1:19 AM