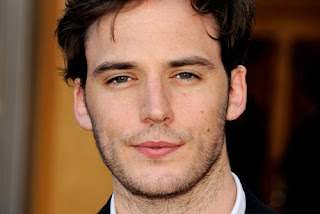 So it's official now.  Sam Claflin will play Finnick Odair in the sequel to The Hunger Games, Catching Fire.  Out of all the casting news for the film that came out within the last few weeks, this was the one that fans were eagerly awaiting, including me.

After Peeta and Gale, Finnick's the one character people will tell you that they love.  You can't judge a character by their looks and when Katniss first meets him, he's wearing nothing but a fishing net and a trident!  It doesn't help that he's described as drop-dead gorgeous.  But as author Suzanne Collins reveals Finnick to us slowly over the last two books and his backstory is known, you'll come to like Finnick even more.

Thanks to the fan-vids out there, I'd already imagined Garrett Hedlund (Tron) in the role.  I don't know what Claflin will bring to it as I've only seen the one movie of his, Pirates of the Caribbean: On Stranger Tides.  But I'm keeping my fingers crossed that he will do justice to the role.
Posted by Sonal at 10:37 AM