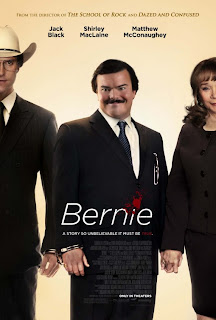 Before choosing to view Bernie, I remembered Roger Ebert's positive review of it and decided to give it a try.  Ebert says that director Richard Linklater's "genius was to see Jack Black as Bernie Tiede."  It's for precisely this reason one should watch Bernie.  Jack Black becomes Bernie and just as he casts a spell over the town of Carthage and Majorie Nugent, he manages to endear himself to the audience as well.

Bernie Tiede is the assistant funeral director in Carthage where he become an indelible part of the community.  He sings at funerals, Sunday church services and at the local theater company productions.  He knows just what to say to a grieving relative and how to make the recently deceased look "at peace".  He also sees the good parts of everyone and is generous to a fault.  In contrast, Marjorie Nugent (Shirley MacLaine) is the most hated woman in town.

He meets the disgruntled widow at her husband's funeral where she's feuding with virtually everyone in her family.  Bernie tries to befriend the lonely old woman and after some time finally succeeds.  Everyone in town is surprised at their friendship, they take trips to the Broadway, to the spa and travel abroad to Europe.  Bernie's time is usurped by his friendship to Marjorie; he gives up his job and basically becomes Marjorie's caretaker to the extent where he handles her finances as well.

Over time, the cracks in their relationship start to show.  There's a reason why Marjorie is the most hated woman in town and even Bernie can't spin her behavior towards others and himself.  She is possessive and jealous of him and time he spends apart from her.  There comes a day when Bernie breaks down and shoots Marjorie in her house.

And that's when the story get weirder.  Bernie covers up his crime and makes everyone believe she's alive for the next nine months! The film is based on the true story of Bernie Tiede who is now serving life in prison for Marjorie Nugent's murder.  Director Linklater includes testimonies of the real townspeople into the film and they give their honest opinion on Bernie, the case and the verdict.  They never believed Bernie had it in him to kill Marjorie and thought he was provoked.  I thought this was the most fascinating part of the film and great way to incorporate the feelings of the divided town.

That's the reason why the over-zealous district attorney David 'Buck' Davidson (Matthew McConaughey) makes it his personal mission to make sure the town doesn't automatically acquit Bernie and get the trial moved to another place.  The DVD cover reads: A story so unbelievable, it must true.  The most fascinating stories come out of real-life events and as it's said often, you can't make this stuff up.

One of the main reason I enjoyed Bernie was because of Jack Black's performance.  He brings a real humanity to the role and you begin to discover the Bernie the townspeople of Carthage knew.  Black's last few screen roles have been disastrous.  I'm still trying to forget Gulliver's Travels and he's better off heard than seen in the Kung Fu Panda films but with this film, he brings back the actor we once liked again.  And that's a good thing.  Welcome back, Jack Black.