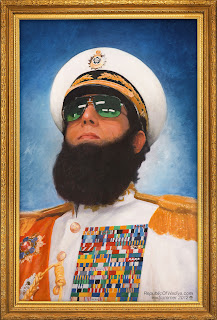 What can you say about a film that opens with a dedication to the late North Korean dictator Kim Jong-il?  That should give us a big clue of the direction this film is headed.  After Ali G, Borat, and Bruno, actor and comedian Sacha Baron Cohen brings us another new character in The Dictator.  The film is set in the fictional country the Republic of Wadiya where Admiral General Aladeen rules with an iron fist.  Well, that's he would like you to believe.  In actuality, Admiral Aladeen is about as clueless as Dr. Evil in the first Austin Powers on his country and its people.

Aladeen played by a farcical Baron Cohen is really just an overgrown child who doesn't know what he wants. Due to some very strange circumstances, he is stranded in New York City where he is supposed to giving a speech at the United Nations.  How he ends up working for an political activist Zoey (Anna Faris) who wants Wadiya to become a democratic nation and falling for her becomes the rest of the film and story.

Aladeen no longer has his trademark beard and becomes just a regular Joe wandering the streets, who thinks that a homeless man with a shopping cart is actually "average American shopper".  This is all a conspiracy of his Uncle Tamir (Ben Kingsley) who wants democracy for Wadiya just so he can sell the oil to the highest bidders and pocket the money.  He should be the actual heir to the throne and by replacing Aladeen on with a dimwitted double (also played by Baron Cohen) who he can control, he'll finally get what he deserves.

Meanwhile, Aladeen doesn't want Wadiya to be democratic just so that he do what he pleases.  He wins every race at the Wadiya Olympic Games and actually shoots at his fellow competitors, he wins all the awards at the Wadiya Golden Globes where he stars in such movies as 'You've Got Mail Bomb', he changes most words in the dictionary to Aladeen and he tries to get his scientists to make a nuclear missile that will attack Israel.  Appalling whims of a dictator but Baron Cohen makes it work as only he can do.

Anyone who displeases the dictator, however, heads to execution as one gesture indicating a throat slip is the signal to be sent away to the gallows.  So when Aladeen finds his formerly executed nuclear scientist Nadal (Jason Mantzoukas) working as a Genius at the Apple store (nice touch!), he finds an ally in his former nemesis.  It turns out that not everyone was executed as presumed; they all just migrated to 'Little Wadiya' in America.  Well, then.  Our dictator is not much of a dictator than just a petulant and spoilt man.

As is the case in most Baron Cohen films, there is humor involving nudity (male and female) and those of the gross out kind.  And because it is him, we almost expect it as well.  But there were some genuinely funny moments where I could not stop laughing and parts where I was waiting for the laughs to come.  Unlike his previous characters, Borat and Bruno, the humor in this film is scripted while the humor in the other films came from people reacting to those characters.  That's what made them even more hysterical.  They just didn't know what to make of him.

The supporting characters all have a fantastic chemistry with Baron Cohen especially the scientist Nadal.  I found their scenes together most hilarious.  What was poor Sir Ben Kingsley doing in this film?  It's good to know that he does have a sense of humor though.  There's a funny cameo by Edward Norton and I thought the covers of songs like Dolly Parton's '9 to 5', REM's 'Everybody Hurts' and the love anthem 'Let's Get It On' with an Arabic twist was truly inspired.

With director Larry David, Baron Cohen has created a character who shocks with his words and actions, a foreigner in a strange land who just doesn't know any better.  But we've seen Bruno and Borat and while The Dictator will definitely entertain and amuse you, I still feel there was something missing.

Before I end, there is this one great speech by Aladeen on the virtues on having a dictatorship which is worth sharing:

Why are you guys so anti-dictators? Imagine if America was a dictatorship.  You could let 1% of the people have all the nation's wealth.  You could help your rich friends get richer by cutting their taxes.  And bailing them out when they gamble and lose. You could ignore the needs of the poor for health care and education.  Your media would appear free, but would secretly be controlled by one person and his family.  You could wiretap phones.  You could torture foreign prisoners.  You could have rigged elections.  You could lie about why you go to war. You could fill your prisons with one particular racial group, and no one would complain.  You could use the media to scare the people into supporting policies that are against their interests.