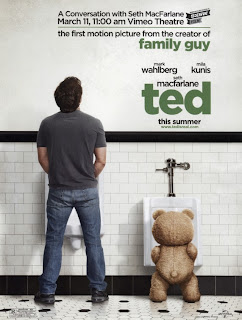 You know what you're getting into when you decide to watch a film by Seth McFarlane.  I mentally ticked off the boxes as I watched the film, crude humor, drug use, Boston based and of course, Star Wars references littered the entire film.  Ted is the first live action film by the Family Guy creator and he's definitely made the film he set out to.

As the film opens, a posh voice of the narrator tells us about the lonely little eight year-old John Bennett who has no friends but all that changes when at Christmas he gets the gift of a lifetime, a teddy bear as big as himself.  John is overjoyed and that night wishes he was real and they could be friends forever.  Be careful what you wish for! The next day, Teddy comes to life and they are best friends and Thunderbuddies for life.

Flash forward 27 years in the future and John (Mark Wahlberg) still doesn't have any more friends barring Ted.  Except now they sit on the couch, do some drugs, drink beer and watch old movies.  It's a perfect guy friendship.  But John has a pretty great girlfriend in Lori (Mila Kunis) who seems understanding but just wants John to grow up and act like an adult.  Easier said than done because John gets tempted to do insanely stupid yet funny things at Ted's insistence.

Ted is voiced obviously by Seth McFarlane and is basically Peter Griffin from Family Guy in the body of Snuggle the Fabric Softener Bear.  It's disturbing at first but pretty soon you'll be laughing along, you can't help yourself.  Ted has absolutely no filter and manages to get in some very funny scraps as he's pursued by a creepy father-son duo (Giovanni Ribisi, Aedin Mincks) for themselves.

But eventually you can't help but root for him and his best friend John to get their lives together.  The film also features some surprising but hilarious cameos by Sam J. Jones, Norah Jones and a silent Ryan Reynolds.  Watch this along with a few friends because where else can you get you get to enjoy a rollicking drunken fight between a teddy bear and a duck named James Franco?