Divergent: The Next Hunger Games? 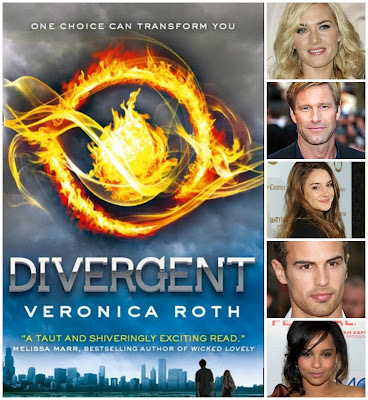 The debut novel of Veronica Roth, Divergent, was first published in 2011 and is set in a dystopian (surprise, surprise) world where society is divided up into five factions: Abnegation (the Selfless), Erudite (the Intelligent), Candor (the Honest), Amity (the Peaceful) and Dauntless (the Brave).  The female protagonist Beatrice Prior is born into Abnegation but struggles to find her true self. After taking her aptitude test when she is 16, Beatrice finds out that she is Divergent and contains traits of different factions.  At her Choosing Ceremony, she makes a difficult path of finding out who she is and instead chooses the Dauntless over the Abnegation.  Thus begins the journey of Tris.

The book isn't as strongly written as Suzanne Collins The Hunger Games series which pulls you in from the get go but I do feel it is better suited for the big screen.  Summit Entertainment, who is producing the franchise, has already set a release date for March 2014 and I must say, the cast is shaping up nicely which is accentuated by the fact that Kate Winslet is playing Jeannie Matthews, the leader of Erudite.  Winslet has been showing up ensemble pieces like Contagion and Movie 43 in the last couple of years and her last big leading role was on HBO's Mildred Pearce so this is a big get for Divergent.  Shailene Woodley (The Descendants) who's the new Mary Jane in The Amazing Spider-Man 2 will be Tris and Theo James is the male lead Four.  (Sidenote: But he will forever be Mr. Parmuk from Downton Abbey for me.)  Aaron Eckhart, Zoe Kravitz, Jai Courtney and Maggie Q round out the rest of the cast as Andrew Prior, Christina, Eric and Tori respectively. The film will be directed by Neil Burger (Limitless).

So if all does go according to plan, we may looking out for the next Divergent in the following years.
Posted by Sonal at 1:27 AM