I don't know about you but there's hasn't been promising film news coming out this week.  First Sam Mendes says he's not coming back for the next James Bond film.  My mind screamed 'Nooooooo!' when I read this.  I enjoyed the last Bond film, Skyfall, primarily because of Mendes' deft direction in allowing us to glimpse in Bond's past and his emotional connections to the people he works with.  The film won a BAFTA for Best British Film and 2 Oscars, one for that haunting 'Skyfall' song sung by the amazing Adele.  I am not pleased by this.  At all.

Then Mark Ruffalo went ahead and confirmed on Twitter than there is no Hulk movie in the works as yet and we won't see him go all angry again until Avengers 2 in 2015. What? This is insanity. 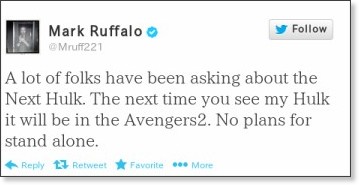 But wait, the week's not over.  Thank God then we have this hilariously entertaining video of Mila Kunis on the press junket for Oz the Great and Powerful having quite possibly the best interview ever!


Thank you, Mila, for saving my week! Can we please see a part two the next time you're in town to promote your film?
Posted by Sonal at 10:46 PM