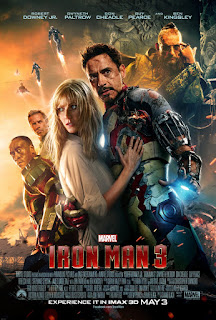 A year ago, The Avengers came, saw and conquered the box office and its fans.  Iron Man Three sure looks to follow its path as Tony Stark is back in an all-new Iron Man adventure packed with enormous effects, many sidekicks and lots of quippy dialogue delivered in a style is uniquely Robert Downey Jr.'s.

The events in New York that leaves the world and Tony Stark unsettled and that is not the place Stark hopes to find himself in.  He has high anxiety if anyone even mentions the city of New York and spends nights he should be sleeping working on the perfect version of the Iron Man.  He is too involved in his personal demons but as we know trouble always manages to find our superheroes.

In this case, trouble is called The Mandarin (Ben Kingsley) who takes responsibility for terrorist attacks against the United States.  And when Happy (Jon Favreau), Stark's head of security, ends up in the hospital after a bomb explodes at the Chinese Theater, Tony just has to get involved. This time it ends up getting really personal as The Mandarin blows up his home to smithereens.

That's when the Iron Man emerges, when all his chips are down and he is reduced to back to being, as he calls himself 'a mechanic'.  He must research what The Mandarin's true intentions are, save his friends and find out what his past has to do with his present.  Robert Downey Jr. was made for this role and it shows.  He knows this character like the back of his hand.

The rest of the cast do their part in aiding Iron Man as both the Iron Patriot (Don Cheadle) and Pepper Potts (Gwyneth Paltrow) step up to saving the day.  Stark also gets a wee sidekick for a little while which leads to great bit about a Dora the Explorer watch. It's hilarious.

Guy Pearce also does well as crazed scientist Aldrich Killian.  I enjoyed James Badge Dale's turn as an evil henchman and Happy Endings' Adam Pally as super-enthusiastic Stark fan.  But the real scene-stealer of the film is Ben Kingsley who takes it to new heights as The Mandarin.  You'll want to watch it again mainly for him.

Just as Joss Whedon's second film The Avengers kicked off the summer season, so does director Shane Black's second film that just sparkles with some great dialogues and explosive climax. Sometimes a Marvel movie is just what the summer doctor ordered.  Take a friend and enjoy the start of summer at the movies.