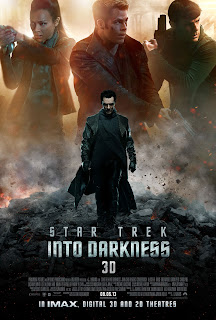 Every film in a franchise comes with big expectations and Star Trek Into Darkness is no exception.  However this time, the weight of those mighty expectations rest more onto director J.J. Abrams who has recently been named director of the upcoming Star Wars Episode VII as well.  As we have yet to see how Abrams will handle the Star Wars universe, let’s take a look at his second outing in the Star Trek universe.

Star Trek Into Darkness opens with a wonderful sequence on a primitive planet that shows us the differing approaches between Captain James T. Kirk (Chris Pine) and First Officer Spock (Zachary Quinto) of the Starship Enterprise.  Of course, the crew of the Enterprise hangs just over the edge until it gets that boost and rights itself back on the correct path.  That's the fun of space adventure according to Captain Kirk.

But Spock's Vulcan instincts ground the crew until two horrific terrorist attack on Starfleet put Kirk and his crew right back in the middle of action pursuing a crazed maniac, John Harrison (Benedict Cumberbatch) in the worst kept secret of the film.  Yes, he is exactly who you suspected him of being.  Yet Cumberbatch fits those sinister boots well, all pale and deeply intense with his voice.

The crew, of course, are all back from the first film. Uhura (Zoe Saldana), Chekov (Anton Yelchin), Dr. Bones (Karl Urban), Scotty (Simon Pegg) and Sulu (John Cho) are the dependable glue on which the ship stands.  Speaking of the Enterprise, the ship also gets some great footage in 3D as it hurtles through space at warp speed. Unfortunately, this comes at the expense of some character development of the Enterprise crew and the core trio of Kirk, Spock and Uhura. I had hoped for a larger role in the film for Saldana than that of constant worrying girlfriend.

There are some great interactions early on between Kirk and Spock and again of the two with Uhura which had me chuckling with affection but then the film got intense, fast.  The action sequences were surprisingly good for post-conversion and had me jumping in my seat at times.  Overall, the film is enjoyable trip to the cinema for Trekkies and Abrams most likely last directorial venture in this film universe (I hope not!) will leaves us wanting more at the end of the film.