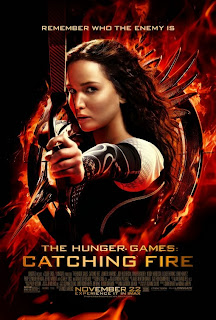 The sequel to last year's wildly successful The Hunger Games, Catching Fire builds on its momentum and delivers a solid middle film that sets up the action for the final two-parter, Mockingjay.  Book adaptations are usually so difficult and people have a love or hate relationship with them especially with a book series that's as successful as The Hunger Games have been.

Catching Fire is a near faithful adaptation of the book that keeps in the best parts of the story and elaborates nicely on its central themes. Jennifer Lawrence steps back into the shoes of Katniss Everdeen who has to adjust to life as one of the winners of The Hunger Games along with Peeta Mallark (Josh Hutcherson).  What both of them don't realize the spark of hope the two of them, especially Katniss, have ignited by challenging the system and President Snow (Donald Sutherland).  Snow wants this new found hope squashed by making sure Katniss knows her place.

While Katniss and Snow are watching each other's moves on the mandatory victory, neither are appeased by their actions and President Snow has to move forward with Plan B.  What exactly does Plan B entail? The plan is much grander, invoking an ages old rule that allows all the contestants to compete in the  Quarter Quell,  the 75th anniversary of The Hunger Games and of Panem's victory and dominion over the rest of the districts.

This time around, it's not just Katniss and Peeta but all former winners of previous Hunger Games.  Team Katniss and Peeta (including Haymitch, Effie and Cinna) have to be that much more on edge and alert to survive.  Katniss has allies in the arena like Beetee (Jeffrey Wright) and Wiress (Amanda Plummer) but others like Finnick Odair (Sam Claflin) and Johanna Mason (Jena Malone) are harder to read. Are they out to help or will they kill her to survive?

This film puts much more emphasis (and rightly so) on the sense of survivor's guilt and trauma these winners feel and how much they and their families are at risk under President Snow and the Capitol's arbitrary laws.  But the film is also laying down the blocks which will make up the arc of the final films where Katniss must choose what and who is worthing fighting for.  In the final scenes, it is made evidently clear that the lines are now clearly drawn in the sand, the fight is now on.

Overall, the film was hugely enjoyable, with great new additions to the cast.  This is the American Harry Potter series, in that as the British series drew the creme de la creme of actors from the island nation, so does this franchise, adding Oscar winner Philip Seymour Hoffman as Head Gamekeeper Plutarch Heavensbee.  The screenplay too features two Oscar winners in the category with Simon Beaufoy (Slumdog Millionaire) and Michael Arndt (Little Miss Sunshine).

I always thought Catching Fire would be the most difficult one to film and get across to the audience because it contains so much information and has so much takes place in difficult island, but it ended up surprising me with how neatly all of it was laid out without losing the core of the book.  It suddenly made me wish that had happened with some of the Harry Potter films.

Director Francis Lawrence has carried over the mantle started by Gary Ross in the first film and hopefully will continue to do so over the next two.  And of course, Jennifer Lawrence IS Katniss completely as she brings out her inner vulnerabilities and strengths.  The movie is all her.  And it's worth nothing that this franchise brings in not only the youngsters (the girls and the boys) but also the adults based on her name alone.  That is quite the achievement for a 23-year-old to have.

If you are a fan of the books or simply curious about the movies, I'd suggest you check out The Hunger Games: Catching Fire.  This heroine is worth following.

Directed by Francis Lawrence; Screenplay by Simon Beaufoy and Michael Bruyn aka Michael Arndt; Based on the book by Suzanne Collins; Cinematography by Jo Willems; Editing by Alan Edward Bell; Music by James Newton Howard