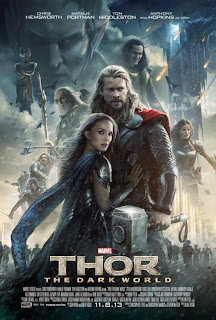 After the events of Thor and The Avengers, many worlds have been altered.  Mortals now know about the existence of gods and while a demi-god named Thor (Chris Hemsworth) pines away on Asgard for a mortal named Jane Foster (Natalie Portman).  Jane is the catalyst in this sequel for accidentally unearthing a dark matter aka 'the ether' which is being pursued by the leader of the dark elves, Malekith (a scary looking Christopher Eccleston).

This put all the Nine Realms and Earth in danger as once-in-a-lifetime event that lines up all the realms together can change the universe irrevocably.  The story allows for Jane to see Asgard for the first time and meet Thor's parents, Odin (a disapproving Anthony Hopkins) and Frigga (Rene Russo).  We also see Asgard and its people suffer great losses as the kingdom is brutally attacked by the elves who want to possess the ether.

But where's foster brother Loki (a great Tom Hiddleston) in all this? He's unfortunately in a fine dungeon dig snarling at everyone and biding his time. In general, it's Loki being Loki and it's great fun.  And we're all waiting until he'll be unleashed. And the unleashing occurs as the brothers have to work together to save Asgard and the realms from Malekith's grand plans. The good and bad part of Thor is that his counterpart and sometime nemesis Loki is much more interesting than him. Tom Hiddleton as Loki has such an mischievious smirk on him, you're often rooting for him over Thor.

But I must say, there need to more moments of levity when Thor interacts with the mere mortals of this world. His interactions with Darcy (Kat Dennings) and Erik Selvig (Stellan Skarsgaard) were great, but nothing beats the shot of Thor of using the underground to get to his destination. Or quietly hanging up his hammer on the coat rack of Jane's flat.  I came thisclose to missing Thor: The Dark World in cinemas.  I'm glad I didn't because the film was a enjoyable experience. I hope I can say that about the next installment of Thor's saga too.