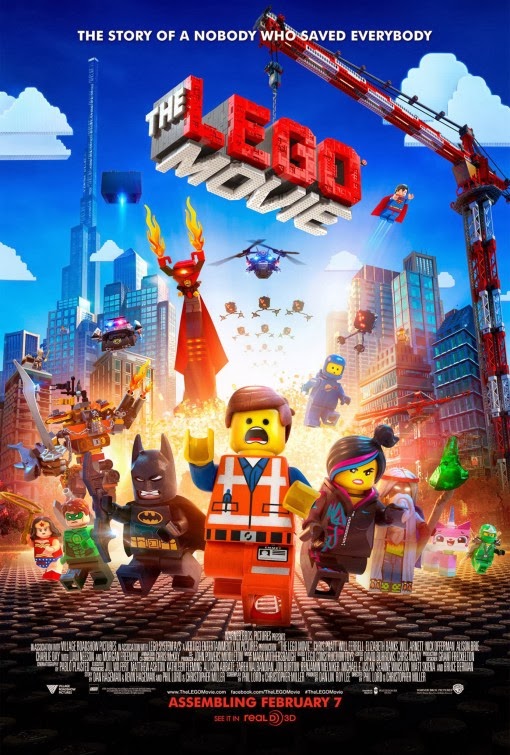 There's been an influx of sequels and franchises in animation for the past few years so it's always great to welcome the new kid of the block when it comes to original content.  The LEGO Movie, the brainchild of filmmakers Phil Lord and Christopher Miller whose Cloudy with a Chance of Meatballs 2 (a delightful and puntastic sequel) released a few months ago, is made up of 100% awesomeness.  This is a fact, you can go look it up.

Based on the toy building blocks that defined most of our childhoods, the film pits the free thinkers vs. the rule followers.  All of this combined in a clever package of humour, the right amount of pop culture and a small dash of emotion makes it hard to resist.  This oft-heard tale of an ordinary hero's epic journey opens with an old man proclaiming a prophecy about the "Special" one and a piece of resistance (Yes, really!). The wise one Vitruvius is voiced by Morgan Freeman (Who else?) states that one "most interesting and special" will save the world from the Kragle and liberate the rest of the MasterBuilders.

Enter Emmet Brickowski (voiced by Chris Pratt, who's adorably clueless in the part), an ordinary construction worker who's like the rest of the citizens of Bricksburg and just longs to be a part of a group to belong to.  He has lived his whole life by the rules, doesn't question authority and is pretty much a nobody.  Until the day he runs into Wyldstyle (voiced by Elizabeth Banks) aka the girl of his dreams (we know this to be true because she is introduced in slow-motion closeup) at the construction site where he works after hours.

He is then sucked right into an adventure he would dare not dream himself as Wyldstyle believes him to be the Special and takes him to the rest of the surviving MasterBuilders and Vitruvius as they band together to take down President Business (voiced by Will Ferrell) who wants to end the world on Taco Tuesday.  The horror!  Emmet tries to fit in but it is soon obvious to everyone that he does not exhibit the skills of the chosen one.  The scene where the MasterBuilders figure out this is hilarious.  Imagine disappointing a group that includes Gandalf, Dumbledore, Superman, Wonder Woman and Abraham Lincoln!

Seriously, The LEGO Movie had me the moment I heard the prophecy by Vitruvius.  The laughs started and did not end until the movie ended.  Emmet gets his chance to shine and prove to everyone especially Wyldstyle that there is something about someone who follows the rules and she as a free thinker comes to understand where Emmet comes from.  That's a lot of deep thinking for a movie based on LEGO toys.

But that's the beauty of the film that at once is both meta and wholly original at the same time.  The supporting characters, a brooding and boastful Batman (voiced perfectly by Will Arnett), a 1980s spaceman Benny (voiced by Charlie Day) who just really wants to build a spaceship, the ever-chipper Unikitty (voiced by Alison Brie) and the conflicted good cop/bad cop (voiced by Liam Neeson) will have you in stitches.  Even the cameos by Superman (voiced by Channing Tatum) and his nemesis Green Lantern (voiced by Jonah Hill) will make you want more.

Many films based on childhood toys have tried to cash in its familiarity and make something cinematic out of it.  Some have succeeded and others have failed.  But no other movie revels in as much as The LEGO Movie does.  I have to admit, I've a bit of Emmet in me, knowing that an instruction manual is there to guide me.  I like using my imagination after all but I like have a manual in front of me as I start.

The LEGO Movie is far and above, the best movie of 2014 for me.  Others may come and win me over later on as more films release in the year.  And if the theme song "Everything is Awesome" is not firmly embedded in your brain after seeing the film, then you need to watch it again.  I know I can't wait to see it again and again.