Movie Review: Song of the Sea 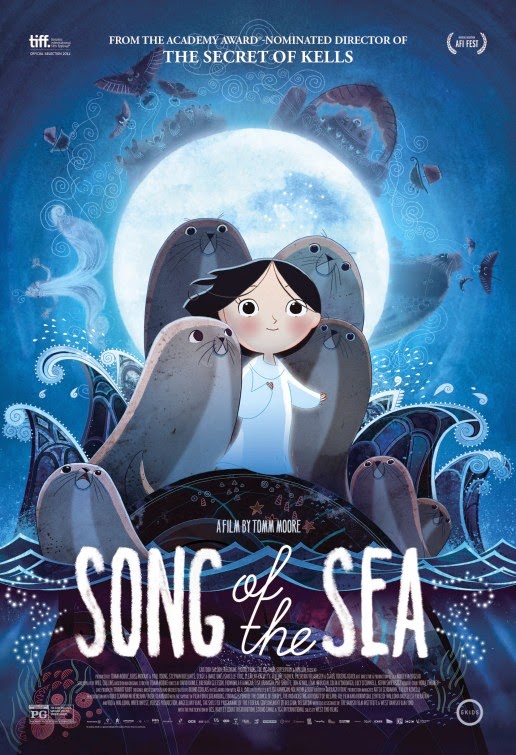 By the time the Oscars were announced, I had only seen three of the five nominated films for best animated feature. I wanted to see the remaining two, Song of the Sea and The Tale of Princess Kaguya. I’m glad that I could cross off Song of the Sea from my list.

From the Irish studio Cartoon Saloon (whose first film The Secret of the Kells was also nominated for best animated feature in 2009), the film puts forth the ancient Celtic lore of the selkie to bring a broken family together. Young Ben (voice of David Rawle) resents his little sister Saoirse as his mother was taken away from him at her birth. As her sixth birthday comes around, the little girl has yet to say her first word. Saoirse finds a shell flute belonging to her mother, along with a white coat, just her size.

Wearing the coat, she is drawn to the seals in the sea and once in the water, transforms into the mythical selkie turns into a seal with them. Her grandmother (voice of Fionnula Flanagan) finds her washed up ashore and threatens to take the children to the city with her. Their grieving father Conor (voice of Brendan Gleeson) doesn’t know how to engage with his kids and lets her take them away. However, with Saoirse finding the flute and the coat, a buzz of awareness has awakened in the remaining fairy creatures and those trapped by the timeworn prophecy, seeking their saviour.

Ben, angry at being separated from his father, his home and his beloved dog Lug, decides to head back to their lighthouse on the island. When Saoirse tags alongside him, the siblings discover hidden memories that surface and lead to break the ancient prophecy. Saoirse learns the song of the sea. And most importantly, Ben saves his sister when it counts the most and learns a valuable lesson on how to keep a promise.

The animation is wonderful, lyrical and fluid. Each character is detailed well; the characters don’t communicate well with each other initially so it’s important that their feelings are shown in their movements. The backgrounds are lovely watercolours, incredibly soothing to the eye. I loved that the old myth of the selkie along with the songs and stories Ben’s mother tells him as a young child were woven into the narrative to show the past and present melding together to show the importance of moving on and living your life.

With Studio Ghibli and its picturesque features of wonder and awe closing shutters for now, I look forward to see what director Tomm Moore and the studio has up its sleeve. I hope you too discover Song of the Sea and see this strikingly graceful animated feature. This is a fantastic film for the whole family.