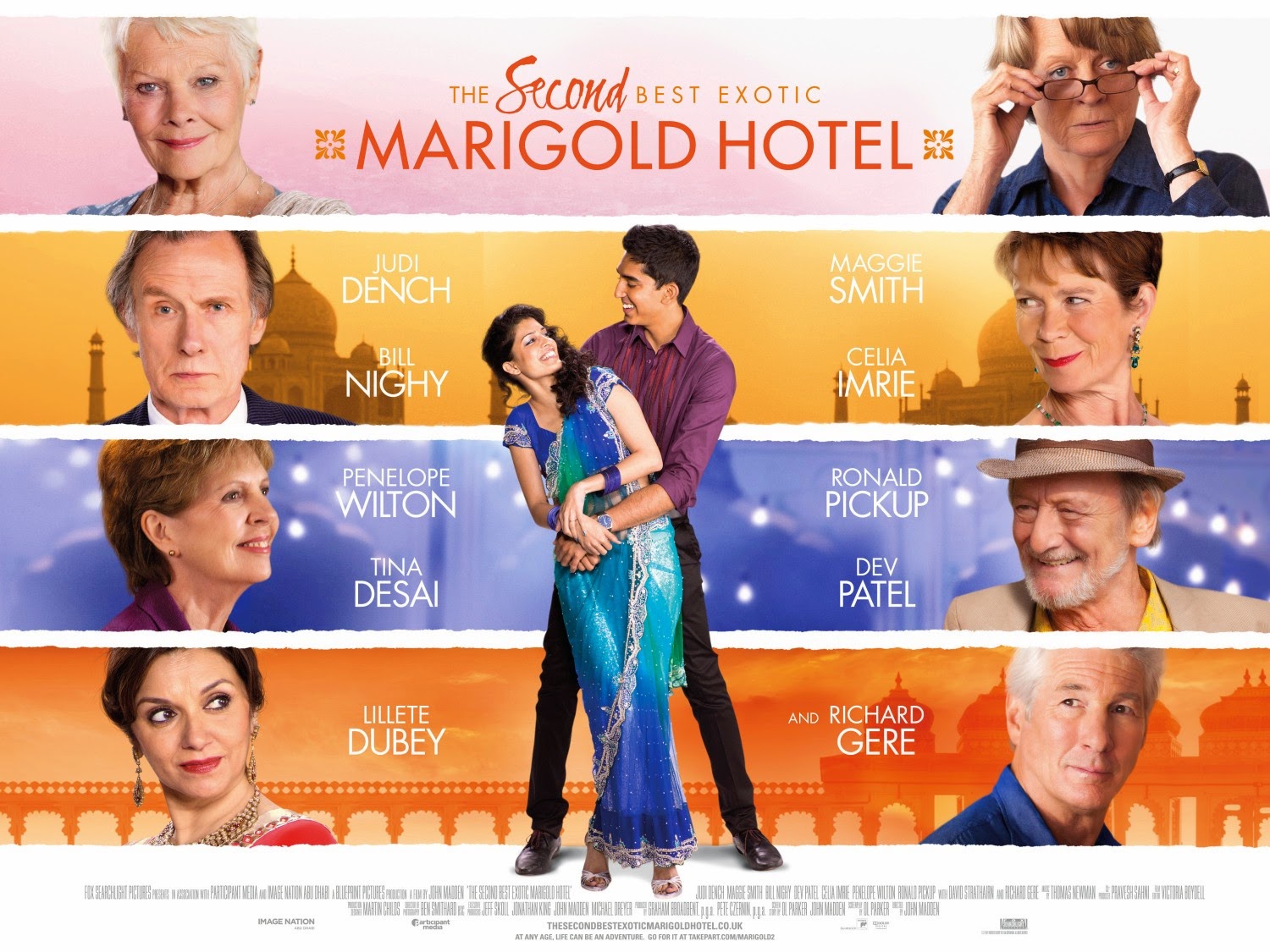 The Second Best Exotic Marigold Hotel, an unlikely sequel, is like that stranger who you once met while waiting at a queue and became fast friends. You never thought you'd see them again, which is why I view this film in such an affectionate light.

Directed by John Madden (who also helmed the first film), the film pops back into the lives of those British senior citizens (reinventing their life in India) and the intrepid entrepreneur Sonny Kapoor (Dev Patel) whose vision brought them all together. The chaos of The Best Exotic Marigold Hotel has largely died down and replaced with the hustle bustle of an upcoming wedding. Sonny is to marry his fiancée Sunaina (Tina Desai) in a few days while negotiating with an American company to expand his business with more hotels.

In walk in two new guests, one, the meek Lavinia Beech (Tamsin Grieg) looking for a place for her mother and the other, a dashing American Guy Chambers (Richard Gere) who wants to start to write a book. Sonny is convinced the Chambers is the inspector sent by his potential American investor to scout out his hotel. This and other misunderstandings lead to him being distracted with his wedding plans. Of course, all these kerfuffles get sorted out on the way to a big fat Indian wedding celebration. But along the way, these retirees learn that reinvention takes a lot of work, while Sonny learns how to put others before himself.

With the median age of the actors onscreen in the late 60s, most of the cast from the first film (minus Tom Wilkinson) is back. This time, veterans Dench and Smith get the most screen time as they adjust to their new leadership roles. Their scenes together are stellar and there's great warmth between these two great actresses and friends. The newbie of the group Richard Gere engages in a possible romance with Sonny's mother (Lillette Kapoor), while Douglas tries to initiate one with Evelyn.

There are terrific one-liners (mostly from Maggie Smith) and the dusty locales of Jaipur and Mumbai are spruced up by Ben Smithard's gorgeous cinematography. My only gripe with the film was its use of Bollywood music which was stuck 10 years in the past. Not one current song could be heard. It could have been due to copyright issues but I wish the music was updated. No Indian sangeet or wedding would played outdated music, but that's just a minor niggle.

Overall, The Second Best Exotic Marigold is a wonderful follow-up to 2011's The Best Exotic Marigold Hotel. The fact that the sequel too debuted at #1 at the box office in countries such as Australia, New Zealand and the UK is proof that audiences don't just want to superhero franchises and dystopian thrillers onscreen. Screenwriter Ol Parker created a fitting environment in which the original characters could return. It may not be everyone's cup of tea and like the title suggests it will run second best to its predessor. But somehow, I can't help but regard the film with fondness.