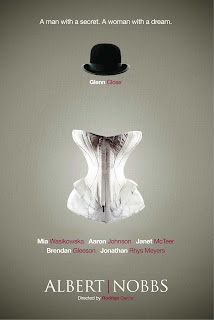 Albert Nobbs was a strange viewing experience for me.  I watched the film in dread knowing something awful was to befall the poor Albert and I didn't like being right.  Not at all.

The film begins in Morrison's Hotel in 1890s Dublin, Ireland where Albert Nobbs (Glenn Close) is a waiter.  The big reveal and I'm not spoiling anything once you know that Glenn Close plays Nobbs, is that Albert has been masquerading as a man for years to get by as she is all alone in the world and has been since a young age after a horrific incident.

Nobbs manages to survive a lonely but efficient existence until one day when a painter Hubert Page comes to paint the laundry room.  Forced to share a room with him at night, Albert finds someone to confide in and reveal the truth.  For once, in Albert's life, hope begins to bloom.  Albert begins to imagine a life as a shop owner, a tobacconist, with a wife to man the counter and a home above the shop.  Nobbs even envisions the young maid at the hotel, Helen Dawes (Mia Wasikowska) might be just that person to share his dreams.

But sullen Helen already has her eyes and heart on Joe (Aaron Johnson), the roguish handyman.  He urges her to encourage Nobbs' courtship, hoping to squeeze some money out of it and she plays along not knowing that Albert really has her best interests at heart.  Everyone sees this drama unfolding and knows the outcome, everyone except Albert, that is.

The film mostly deals with the downstairs crew, the help, of the hotel and their hopes for a better life for themselves.  If you're a fan of the popular British period series, Downton Abbey, you might have been tempted to check this film out.  As was I.  Unfortunately, unlike Downton Abbey, the story is not quite as entertaining nor are the characters as compelling that you'd want to see more.  It's a shame because the cast features some big names of British film and theater and the film even scored two acting nominations for Glenn Close and Janet McTeer at this year's Academy Awards.

I definitely expected more from the two breakout young stars, Aaron Johnson (Nowhere Boy) and Mia Wasikowski (Jane Eyre) but their relationship in the film was doomed from the start; their characters acted young and selfish with not much care for anyone else.  The actors don't get much to do but be petulant about their situations.

The film is all Glenn Close (who also co-wrote the screenplay) and she is simply transformed in appearance and character to become Albert Nobbs. She previously played this same part on stage in 1982 on a off-Broadway production based on the short story by Irish novelist George Moore.  I'm not sure if the film translates well onscreen.  Maybe others might feel otherwise.  I wasn't feeling it.  Come to think of it, this movie was quite depressing and story moves along at a snail's pace.  And thus ends the tragic tale of Albert Nobbs.