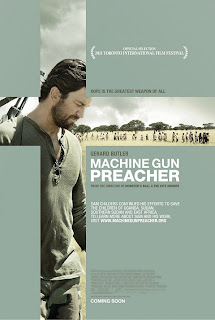 Before watching the film, I thought Machine Gun Preacher was an odd name of the film and seeing Gerard Butler in it, who hasn't had a hit in awhile, I really didn't have any expectations.  The subject matter of the film is heavy and there are some difficult images to stomach knowing this is really based on a true story, it is well-meaning film that should be seen.

The film is a biopic of the life of Sam Childers, based on his memoirs, Another Man's War.  Childers is a former felon who goes through some really low points in his life, only to turn around and become a savior to the hundreds of children of Southern Sudan and Northern Uganda from Joseph Kony and his Lord's Resistance Army (LRA).  If the name sounds familiar, it's because thanks to a lot of press and social media coverage, the atrocities committed by Kony have been made known around the world.  There are several documentaries like Invisible Children and Children of War that highlight the plight of the children of Sudan.  The sad part is this has been going on since over two decades and yet the children still roam at night looking for a place to sleep.  There is still no clear solution to the situation the children face there.

Sam Childers (Gerard Butler) first comes to know about the children in Africa when he volunteers to go there to build houses and sees firsthand the children without a place to sleep at night and the villages being burnt to the ground.  He owns a construction company and believes he can make an orphanage to give the children a safe haven.  This all occurs towards the middle of the film and before that we are shown how low Childers went.

When he returns from jail, he finds his wife Lynn (Michelle Mohaghan), his daughter Paige (Madeline Carroll) and his mother (Kathy Baker) have all moved forward and they want him to come to church with them.  He resists and falls back into his old habits with his friend Donnie (Michael Shannon) and goes back on a drug and crime spree.  He hits rock bottom when he almost kills a drifter he and Donnie pick up.

That's when he turns his life around, starts his own business and builds his own church.  This where the preacher in the title becomes evident.  It's what the children of Africa call him as he doesn't just run the orphanage but he also rescues the abducted children that LRA captures from the villages.  He does so with help from Sudan People's Liberation Army (SPLA) and especially through his friend Deng (Souleymane Sy Savane).

The film shows the struggle Childers faces by showing the good days when he gathers all the money he can from the US to build a playground for the orphanage and the bad days too when because they only have one vehicle they aren't able to save all the abducted children to fall prey to LRA yet again.  He even faces a crisis in faith when his friend Donnie overdoses, he faces financial troubles and can't raise enough money for the orphanage and fights with his wife and daughter and goes back to Africa where he thinks he is need most.  While there he meets again with a young boy, previously captured by LRA, who still looks for his brother and gives the preacher a talk about expelling the hate from his heart.  It's a touching and beautiful moment in the film and it's extremely sad thinking that there must be thousands of stories like that out there.

The film ends by showing us images from the real Sam Childers, his family and the orphanage out in Africa.  The credits tell us that he is still out there trying to bring back the abducted children from the LRA's clutches.  Machine Gun Preacher is well directed by Marc Foster (Finding Neverland, Monster's Ball) and even though the story takes a while to get started, it's important to know Childers' backstory.  My only problem with the film was the casting.  Butler is okay here and his accent slips now and then but I really feel a stronger actor would have been better.  Same with Michelle Monaghan, she's usually more animated in other films, I really found her performance flat here.  Ignoring this, the film stands up as a look into a life of someone really trying to do their best and make a difference in the world.