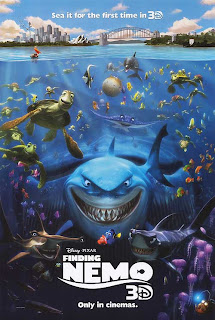 I don’t know what it is about Finding Nemo but it just hits the spot every time I see it.  Maybe it’s the cool soothing blues of the ocean that transport you to another world where an ordinary yet brave father is on a quest to find his lost son.  Maybe it’s the way that these fishes remind us of our own personal relationships, insecurities and fears.  Maybe it's the way I identify with Nemo and being raised by a single parent too. People never expected an animation film to have such depth.  This film was a gamechanger for Pixar in many ways.

I missed out on seeing it the first time around in 2003 and caught the film on DVD and since then it’s been one of my all-time favorites.  I simply could not miss the 3D re-release back in theaters.  Watching this movie is like revisiting old friends.  We all know the characters Marlin the clownfish, Dory the Pacific Regal Blue Tang, Bruce the shark, Crush the sea turtle and of course, little Nemo, the rebellious young son of Marlin.  Even though I’ve seen the film many many many times, I was still enthralled by the story and the adventure under the sea.

The jokes are just as funny the second time around and it was pleasure listening to people laugh in the theater at all the right places.  Ellen DeGeneres is just as hilariously sweet as Dory and I still love her take on “speaking whale”.  The quirky gang at the dentist’s fish tank, the vegetarian sharks, Nigel the pelican, they are all part of movie culture now. “Fish are friends, not food.” “P. Sherman, 42 Wallaby Way, Sydney.” “Sharkbait! Hoo ha ha!” “Oh, dude. You’re ridin’ it, dude! Check it out!”  These are all lines we know by heart now.

As for the 3D and the real reason for the re-release in theaters, it was exciting in a couple of scenes but added nothing new to the film.  In fact, it made the film's main attraction, that beautiful blue underwater world looked darker than it actually was.  Kids will enjoy it but not realize on what they're missing out on.  Watch it again on DVD to see the real color pallette of the film.

Despite the color problems, this was an enjoyable trip to the theaters to revisit an old favorite and I'm glad that whole new generation is getting to experience it if they haven't already caught it on DVD.