Movie Review: To Rome with Love 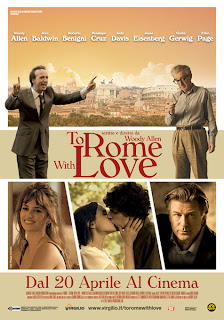 Ah, Rome! After seeing To Rome with Love, I wished I could transport myself into those sunny cobbled streets for a stroll down these characters' neighborhoods.  Rome looks so very inviting in this new European tale by Woody Allen.  You too might find yourself wishing you could move there too.

First of all, the comparisons to last year's exquisite Midnight in Paris and winner of last year's Academy award winner for Best Original Screenplay will persist.  But this is another film set in a equally magical city yet the stories that come out of it are a different tone.  Writer-director Woody Allen brings us four stories of Roman citizens and the people who come visit it and try to understand it and themselves.

Most of the stories are a comical vein especially the storyline involving Italian actor, Roberto Benigni, whom we haven't seen in a long, long time after Life is Beautiful.  We are introduced Hayley (Allison Pill) who falls in love with Michelangelo (Flavio Parenti) while searching for the Trevi fountain and when they get engaged, calls over her parents Phyllis (Judy Davis) and Jerry (Woody Allen).  Another story features John (Alec Baldwin), an established architect who hasn't returned since he was a young man and runs into Jack (Jesse Eisenberg) who is faced in a similar situation as John was many years ago.

Jack is torn between his good and trusting girlfriend Sally (Greta Gerwig) who allows her good friend Monica (Ellen Page) to come live them knowing that men just can't resist her.  Girl, don't you know better? This was one of the most frustrating storylines of the film for me.  All the characters know what's wrong for them but they still persist on anyway. Typical of some Woody Allen films.  The problem also was that I couldn't picture Page essaying the role of vixen.

In another story, Benigni is Leopoldo Pisanello, an ordinary and boring everyday Italian who wakes up one day to discover he is a celebrity.  The problem with your 15 minutes of fame is that you're always left wanting more.   And finally, young Italian couple Antonio (Alessandro Tiberi) and Milly (Alessandra Mastronardi) who are on their honeymoon to Rome spend it apart in the most outlandish story of the movie.  Antonio is mistaken by Anna (Penelope Cruz), a prostitute, as her next client and Milly finds herself face to face before her favorite actor Luka Salta and shenanigans ensue when identities are mixed up.

The most hilarious story is one featuring Woody Allen himself. It turns out that Jerry is a retired opera director and when he catches his soon-to-in-law, Michelangelo's father Giancarlo (Fabio Armiliato) in the shower, he is convinced he has found the next opera star.  The joke's on him as Giancarlo can only sing in the shower.  This bit is stretched too long but I thought it was hysterical.  Armiliato actually is a renowned Italian tenor and casting him here was perfect.

The ensemble cast doesn't intersect in any way for which I was thankful. But they each got a chance to shine in their own way.  Judy Davis and Greta Gerwig don't get too much screen time and Davis gets to say the best lines of the film that made me laugh out loud when Jerry claims to have a high IQ: You're thinking of Euros, in dollars it's much less.  And while I was aware that Penelope Cruz had acted in an Italian movie before I was fascinated by her speaking Italian so well.  I might have to go and see her films in Italian now.

The real star of To Rome with Love is the city which is wonderfully photographed with this warm light that makes you feel that you need to be there.  A great big commercial for the Rome tourism board.  I wish to book my tickets immediately.