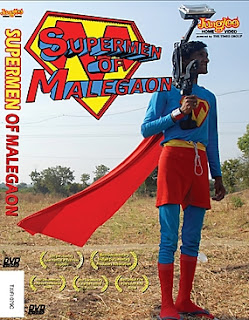 Supermen of Malegaon is a wonderful, charming documentary on the men from the small town of Malegaon in India who decide to make an Indian parody of Superman.  Everything about this sounds like there's no way a film like this would ever get made but there's a lot to be said about the can-do attitude of one man's vision.

Malegaon is located in the state of Maharashtra, roughly 296 km from the filmmaking capital of India, Mumbai.  The population is 75% Muslim and most of the men work in power looms. Oh, and they are all movie mad. With a passion. They love to watch movies, any movies.  They don't care how good or bad.  They'd rather be watching a film to escape from the daily grind of their hard lives.

They're also obsessed with movie stars.  The men line up to get a haircut just like Shah Rukh Khan and kids can buy a kite featuring the star-crossed lovers of Titanic, Kate and Leo.  But one man had a different idea than just simply watching a film.  Nasir Sheikh decided to make his own film after watching movie after movie he was screening for others in his video parlor.

So he went on to create Malegaon ke Sholay - a takeoff of Sholay which is arguably the best film in Hindi cinema and another film as well which were successful.  But Shaikh still wasn't satisfied.  He wanted to be challenged and show the community in Malegaon something different.

He sets off to make Malegaon Ka Superman which is highly ambitious by Malegaon standards, it involves a super villain, many stunts and using green screen.  Yet he soldiers on, he approaches the local tailors to get both his Superman costume and his chroma cloth sewn.  Both tailors have no clue of what they are making.  Shaikh has to specify everything.

The first look at Shafique, our Superman, is startling.  This pencil-thin man is going to be Superman? Shaikh reminds us again that this is a comedy (hence the drawstring on his red boxers).  This Superman will have asthma because of all the pollution and plenty of times needs saving himself as is evidenced many, many times in the film.  You can't help but laugh and sometimes feel sorry for the plight of this Superman.  He doesn't have it easy as his Hollywood counterpart.

In this low-budget production where even the lead actor has to double as a grip, the villain is also the special effects guy and editor, impressively, everyone is keen to give it their all.  They all discuss the making of the film as if it is one of the most important things in their lives and it is.  Even an extra knows being in the film will change his life.

Often while watching the latest Hollywood blockbuster, we get caught up in the grand spectacle of it all and forget the simple charms of moviemaking.  This film will remind you of the first time you picked a camera with your friends and tried to make your first video or film.  The inexperienced crew can be clumsy (the DV camera tumbles down in the river) and many a times funny (our Superman jumps in to save some kids but he can't swim) but eventually it is endearing.

I was reminded of another such film which was also a labor of love.  Yet this film is also bittersweet.  Shafique, the lead, didn't get a chance to enjoy his stardom after all that he suffered in the making of the film.  He passed away due to cancer and the documentary is dedicated to him.

Director Faiza Ahmed Khan has put forward a documentary that has real heart, how often do you get to see that? If you can get your hands on this film, I highly recommend you do so, you'll end up with a smile on your face and thoroughly impressed with the tale of movie mad town that you've never heard of before but now won't forget.