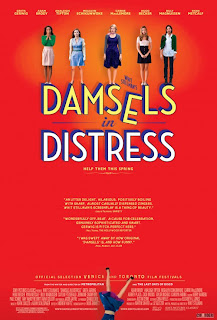 If you're a fan of unconventional comedies and stellar dialogues, you'll really enjoy Damsels in Distress. This film was not at all what I expected and I'm extremely glad I picked this film to watch.

Seven Oaks University is a place that could only exist in a novel or a film like this one. We meet Violet Wister (Greta Gerwig), the leader of a group of girls whose intentions are pure and well-meaning but come across as self-serving and arrogant to others like Lily (Analeigh Tipton), the new transfer student and now new addition to the group.

But this isn't Mean Girls although it has shades of Cher and Dione helping out Tai in Clueless when Violet, Rose (Megalyn Echikunwoke) and Heather (Carrie MacLemore) spot Lily to help her out. Lily is more than capable of handling herself when they involve her in their schemes. The do-gooders have many youth outreach programs on hand, they work at the Suicide Prevention Center where they hand out doughnuts and coffee to those feeling low, promote tap dancing as therapy and aim to change the poor souls at the Roman fraternity houses. That's right, Seven Oaks doesn't have the Greek system, it has a Roman system. And when everything goes absolutely crazy on one of their holidays, Violet and Rose lament that 'This is what happens when we don't teach Latin in school.'

Violet and Rose have know each other since they were little girls and are the most interesting characters of the film in that they totally manage to re-invent themselves and still manage stay true to who they are. Rose speaks with a pronounced English accent and her delivery of a particular line had me in fits each time.  She thinks most men have "playboy or oper-a-tor move" that they use on women.  I want to include that phrase, exactly how she says it, into my everyday conversation. You might want to as well.

There is no real major story or arc in the film, just the experiences of these odd yet adorable college students. Violet has become one of my favorite characters from the films I've seen this year. Her aim in life is start a dance crazy called the Sambola, she can spot a liar anywhere and she seeks to eliminate body odors by mailing out fragrant soaps because they hint at hope and possibility.

While the rest of supporting characters are just as eccentric. There's Frank (Ryan Metcalf), the frat boy who Violet once admired, really really likes his bean ball and keeps a backup for those dark days when you just might need it. And Thor (Billy Magnussen), friend of Frank's and another frat boy, who can't tell colors apart and rainbows really confuse him. Wait until you find out the reason for this. I was in splits.

Lily, who seems to be the "normal" one in the group, juggles the attentions of two guys, graduate student Xavier, pronounced 'Zavier' (Hugo Becker) and Charlie (Adam Brody). But she can't read them well either. These damsels who need rescuing are often the ones rushing to the aid of others.  They're just navigating through a phase of their lives that everyone faces at one point.  Theirs just happens to delightful funny.

After a long time have I enjoyed a film and its dialogues so much that I want to quote them.  Here are just few of the gems:

Violet: I don't really like the word 'depressed'. I prefer to say I'm in a tailspin.

Violet: If they can't even destroy themselves, how are they going to teach America's youth?

Violet: College students are well known for their interesting conversation.  After all, they can talk about their courses.

Violet: Do you know what's the major problem in contemporary social life?
Lily: What?
Violet: The tendency, very widespread, to always seek someone "cooler" than yourself - always a stretch, often a big stretch. Why not instead find someone who's frankly inferior?