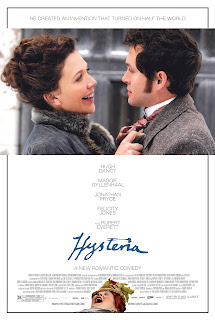 Hugh Dancy is Mortimer Granville, a forward thinking doctor whose ideas are dismissed by the stuck-in-their-ways doctors who also happen to be his bosses.  He is kicked out of job after job until he lands at Dr. Dalrymple (Jonathan Pryce) who is doctor to most of the wealthy women of London.  His diagnosis is often hysteria which he says is the result of an "overactive uterus" and usually difficult to deal with.  His cure was a "pelvic massage" for which the women filled his waiting rooms.  Young Mortimer is hired with the intention of eventually taking over from Dr. Dalrymple and even marrying his younger daughter Emily (Felicity Jones).

But as things never go to plan in a film, Mortimer discovers obstacles in his way.  One of them is Dalrymple's older daughter Charlotte (Maggie Gyllenhaal), who runs a shelter for the less than fortunate and their children.  She is seen as an outsider in society for her forward thinking way which are denounced by her father.  The other obstacle becomes, funnily enough, Mortimer's right hand as he is prone to cramps as the number of women grows and grows.

Frustrated he goes to his friend Edmund St. John-Smythe (Rupert Everett) whose parents have been his benefactors since he was a child.  Edmund is a bit of an eccentric inventor who owns a telephone and chats with the Queen.  Instead of saying hello on the telephone, he opens with "Ahoy!" just as they would in those times, but I obviously associate it with Mr. Burns on The Simpsons.  But even back then they had network problems as Edmund yells, "Can you hear me now?"

Edmund's newest invention is the whirring feather duster which Mortimer discovers can be used to alleviate his aching hand.  But there might be another use for it after all.  They revamp the machine to use in Dr. Dalrymple's office and from there it is a success and ushers in the "portable home-use massager".  The other sub-plot involves Charlotte trying to raise money for her shelter unfortunately lacks luster.  It was more amusing to watch Edmund and Mortimer "test" out the new machine.

It is astonishing to learn that women diagnosed with hysteria at that time were subject to institutionalization and surgical hysterectomy for no fault for their own.  This unfair diagnosis only ended in 1952 when the American Pyschiatric Association discontinued it.  Shocking, indeed! Hysteria is a fun watch but the comedy  wavers towards the end and everything gets all too predictable. Instead, I'd recommend another Rupert Everett film with sparkling dialogue and cast in The Ideal Husband.  I wanted to re-watch it after viewing this one.