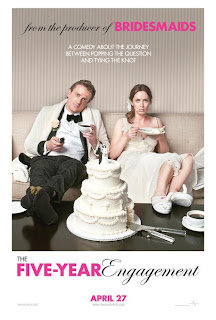 The Five-Year Engagement can't decide what type of a film it wants to be, a comedy or a drama. On the heels of The Hangover and last year's wildly successful Bridesmaids, this looked and felt like another comedic wedding film.  Just take a look at the poster above.

But the film is no laugh fest and the dull conflicts between the leads made for little drama which is a shame because the actors all have great chemistry with each other. In the end, I could barely muster few smiles for them. Director Nicholas Stoller's previous collaboration with Jason Segel was the delightfully charming The Muppets which contained just the right amount of nostalgia, affection and respect. This movie, however, is a big ole mess.

The premise is that a newly engaged couple Violet (Emily Blunt) and Tom (Jason Segel), that too only after a year together, are faced with career opportunites, family expectations and their own insecurities as they try to make it to the altar. Hence the title The Five-Year Engagement.  There are these moments in the film that meant to be funny that just comes off as incredibly awkward.  Violet's grandparents from both sides keep dying and since they've been waiting and hoping for her to get married, it's supposed to be funny.  Not really; that joke got played out in the trailer.

The supporting characters are notable from their roles on television like Mindy Kaling (The Office), Chris Pratt (Parks and Recreation) and Alison Brie (Mad Men, Community).  They are far more interesting and stable than our leads.  Rhys Ifans, who plays Violet's boss, has a very funny moment when he ninja attacks Jason Segel who is chasing him down a cold, freezing Michigan street.

The movie tries to explore the difficult situations couples face in this day and age: distance, job security and happiness and of course, the c-word, commitment, all of which could have been explored well, comedically or dramatically.  But the film never seems to find the middle ground here.

The Five-Year Engagement tries to make all that up in a charming ending but it's a little too late by then.  When the credits rolled, I realized the couple still hadn't worked out all their issues.  They're going to have a bumpy road ahead.  I'm not keeping my fingers crossed for a sequel though.