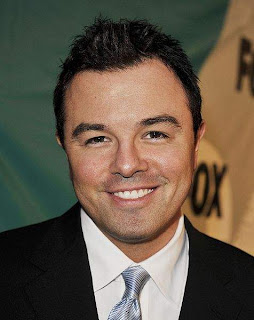 And the host of next year's 85th Academy Awards is, drumroll please, Seth MacFarlane!!! The creator of many animated shows including the Emmy-nominated Family Guy, MacFarlane seems a surprising choice for host.  After going edgy with two young hosts in last year in James Franco and Anne Hathaway and playing it safe this year with hosting legend Billy Crystal after Eddie Murphy left, I really did think things seemingly pointing towards Ricky Gervais to get a shot of hosting.  He's not going back to host the Golden Globes anymore.  But it does mean one thing for sure, if you've watched any of MacFarlane's shows, he's not going to hold back.  Not at all.  Things are going to get interesting come February 24, 2013.
Posted by Sonal at 12:06 AM