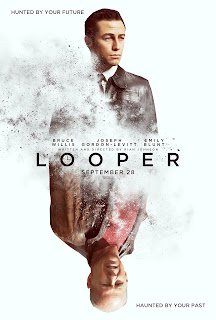 Looper is one of the best time travel films I've seen. Period.  It's due to the great writing that even though you'll have so many questions about the whole enterprise, the film will literally blow you away. I think I watched the film at the edge of my seat wondering what was going to happen next. I thought I could predict what happened next but the film surprised me with turns and twists it took.

In 2044, a bleak looking Kansas, we meet a looper named Joe (Joseph Gordon-Levitt) whose job it is to "take care" of the unwanted criminals/associates that the mob sends back from the future.  Joe tells us that in 2044, time travel hasn't been invented yet but in the future, thirty years from his present, 2074, it has been outlawed and only the criminals use it.  It is impossible to get rid of a body there so it is easier for the loopers to do the job for them.

However, the life of a looper is quite grim and depressing.  They do the dirty work of offing all these people and they also have sign an agreement that eventually they will close the "loop". That they will kill their future selves and be paid handsomely to live the 30 years till their death.  Well, would it be called a suicide since they are killing themselves?  Another question to think about it.

Joe goes about his business and has aspirations for a better life than the alternative he has now; he is learning French and saving up for a new life later.  Seriously, there seem to be no great job opportunities in Kansas 2044.  This is not the future we'd want to imagine for ourselves.  But this is not a film about how bad the future is.

The day comes when at the cornfield where Joe has to exterminate whoever is sent back in time (his usual spot), he meets his future self.   But unlike the bound and head covered "hits" that usually pop up, he looks right into his own eyes and is disconcerted.  This little moment allows Old Joe (Bruce Willis) to gain the upper hand and escape.

And here's where the film goes up another notch.  Both Joes (young and old) have their own agendas.  Young Joe has a plan in place for his life forever, he has accepted what will happen to him after closing his own loop and doesn't want to get on the wrong side of Abe (Jeff Daniels), his current mob boss.  Old Joe has 30 years of life on the other side and the love of a good woman who dies as as the new mob boss, the Rainmaker, in the new future comes to send him back to the past.  He's devastated and believes the only way to do change her death is to get rid of the man who put the orders to close every looper's loops.

So simple yet so complicated.  In an amazing scene set in a diner that Young Joe frequents, they both sit across each, assess and tell each other what they both should do.  Both of them are headstrong, so strong in their beliefs that their way is correct way to handle the situation. While Old Joe may have been mellowed by marriage, he is clouded in his judgement and is willing to do anything to solve his future's problems.

Young Joe on the other hand for all his youth and impetuousness seems more willing to weight the pros and cons once he sees the big picture.  It all comes to a head at a farm where a young mother Sara (Emily Blunt) is trying to raise her son Cid (Pierce Gagnon).  The scenes at the farm revealed so much about these three characters: Young Joe, Sara and Cid.  We see the best and worst of them.

I love a film that raises questions and doesn't just answer them for you.  The two Joes are on the same path to fix what's broken in their lives but their methods and executions are so different.  But they are the same person, divided only by time.  It is so fascinating.  Would you recognize and identify who you will become 30 years into the future?  There is substantial enough time to change the person you once were.

But can you ask your former self to change who you are at the time?  Others might take away something else from the film. Maybe the justification of trying to change the past by eliminating something or someone from it or to can you change a person's nature by nurture? But what stayed with me was the meeting of the past and future selves, both making a claim that they had a right to their lives. Even if one wins, the effect of changing the past is massive and might not bring the change you desire.

However, I did feel the film's ending is just right and fitting.  Director Rian Johnson has written an amazing script of a sci-fi tale that has hints of everything from action, love and suspense in it.  There are even a few lines of humor through in once in a while to ease the tension thankfully.  Initially, I was still thinking of a few stray plot lines that were introduced earlier but my questions were answered by the end.

The three leads are spot on.  The film does a good job of trying to show Gordon-Levitt as younger version of Willis with a changed voice, face and mannerisms although it was obvious the facial changes were due to prosthetic makeup.  Many times, it was like watching another actor and it felt like relief to finally see the typical arch of the eyebrow on Gordon-Levitt's face.

Bruce Willis is as cool as ever as the hardened looper just trying to get it done but you see the toll of making some awful and difficult decisions and what it does to him.  Emily Blunt too has a strong role as a conflicted mother who wants to do right by her son.  Pierce Gagnon who plays Cid brings equal amounts of creepy and cute to the role.  Looper is a film that you will want to watch again mainly because you'll want to discuss it with your friends and family.  Try not to get to learn too much about the film before you go in, let the events unfold before you and it'll make for a better viewing experience.