Movie Review: Student of the Year 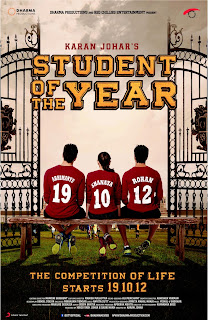 Karan Johar's latest film, Student of the Year, is the tale of two mates whose friendship is ruined by a competition that comes between them.  If they had stuck to that brief maybe the film would have succeeded.  Student of the Year works only as the launch film for the newcomers out of whom Alia Bhatt, sadly, doesn't have much to do except look pretty.

At St. Teresa's High School in Dehradun, new student Abhimanyu (Sidharth Malhotra) joins the school on a sports scholarship.  Abhi comes from a middle class family like one half of the school.  The other half consists of the rich kids like Rohan (Varun Dhawan) and Shanaya (Alia Bhatt), spoilt yet neglected children who think they have the run of the place.  The other students includes the stereotypical tomboy Shruti (Mansi Rachh), the smart yet plump kid Kaizad that everyone picks on (Kayoze Irani), the clueless sidekick Jeet (Sahil Anand) and the calculating cheerleader Tanya (Sana Saeed, who was little Anjali in Kuch Kuch Hota Hai!).  All of them are competing against each other for the prestigious Student of Year trophy that is supposed to open doors and secure that student's future.

But before we can get to the actual competition, there are clashes between the two leads, Abhi and Rohan who eventually become friends, get to know each other's family and become a part of the most overused plot in any teen film, the love triangle.  This was the most colorful film I've seen recently, so many costume changes (all designer, mind you) and the sets all look like they are straight out of High School Musical but with wider hallways for maximum strutting space, where there's always a wind machine nearby to gently ruffle your hair.

As a result, a song sequence occurs every five minutes since all characters really need to sing everything they feel.  The music is hummable but the lyrics are completely inane.  We eventually do get to the actual competition, a test of the mind, body and dancing skills (this is a Hindi movie, what else do you expect?).  And as all the annoying voice over narrations keep telling us, it destroyed their lives.  How dramatic except it could all have been solved by a simple heart to heart.  I really wish they had one sooner, it would have saved twenty minutes from the film.

Sidharth and Varun are awkward in certain places but manage to shine in the key moments of change in their characters' arcs.  Alia, like the other female characters in the film, is overshadowed by the guys in her lives that she can't choose between and as a result doesn't have a strong role to speak of.  All three of them, however, have an enviable launch in this directorial venture by Karan Johar where they are never shot in an unflattering angle ever.  You get a very good looking film.

This is Bollywood over the top but it does have it moments.  There were many laugh out instances  and the speech at the end by Kayoze Irani's character brought up some valid points.  If only the script was stronger and not quite so shallow, this could have been the defining "high school" film of Hindi cinema.  Karan Johar has made one of the most beloved films about college in Kuch Kuch Hota Hai and 14 years later, he's attempted to do so again with Student of the Year.  We'll see how many fond memories we hold of this years down the line.  I know I'll still hold Kuch Kuch Hota Hai as my sentimental favorite.