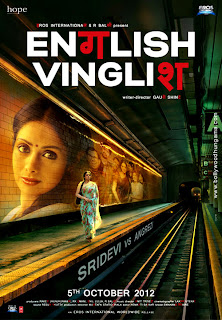 I can't remember a nicer time I've had in a movie theatre in a long time.  Sridevi returns to Hindi cinema with a film that truly worthy of her.  She plays Shashi, an Indian housewife who does everything for her family and even runs a small business of making laddoos but feels undermined and underappreciated by her family.  Shashi doesn't know English that well and her family makes leaves her out of conversations and jokes that they think she won't understand, not realizing how much they are demeaning her.

However, an opportunity to go to USA for her niece's wedding for five weeks changes everything.  At first, she is morose and nervous about going to foreign country alone especially as her tactless husband Satish (Adil Hussain) keeps reminding her that she doesn't speak the language.  But she bravely attempts to make the best of her situation.

Aided by her winsome young niece Radha (Priya Anand) and after an really unfortunate incident in a cafe, Shashi enrolls for a four-week English class.  Here we are presented with some fairly stereotypical students like the Mexican nanny Ava (Ruth Aguilar), the South Indian IT guy Rama (Rajeev Ravindranathan) and the overly enthusiastic English teacher David (Cory Hibbs).  It might have veered into OTT territory but the movie didn't seem to have a mean streak in it so I overlooked it.

Also in the English class is the very appealing Laurent (Mehdi Nebbou), a French cook who falls for Shashi.  They form this odd friendship wherein they can't speak to each other in English so they both pour their hearts out in the languages they know best.  Those were the truest moments of the film for me.

English Vinglish is director Gauri Shinde's first film and it has a very strong voice.  I loved the locales used in New York, I know that area around NYU and Washington Square Park so well.  It felt nostalgic to see them onscreen.  The interactions between Shashi and her family felt truly genuine and I really liked her relationship with Radha.  Her own daughter doesn't give her the same affection and support that Radha does.

Sridevi was probably everyone's favorite actress growing up.  She was charming, funny and danced like a pro.  We see glimpses of it here in her Michael Jackson moves.  Here she is just as good as she was at the top of her game.  There are moments, little touches in her performance that move you. When she has to say goodbye to her son, her moment of pride as she uses her Metrocard without any help and the way she repeats the weather forecast to herself to learn new words.  I hope her next films are equally strong as this film is.  This one was tailor-made for her strengths.

The supporting cast is also very good and they rise above the stereotypical roles they've been assigned. Especially adorable is Shashi's young son Sagar (Shivansh Kotia) who steals the scenes he's in.  And you will definitely feel for poor Laurent who pines away for Shashi.  English Vinglish is a film you will recommend to your friends and family and one you'll want to see again.  Don't miss it.

(an extra star for Sridevi alone)
Posted by Sonal at 11:41 AM