Movie Review: The Cabin in the Woods 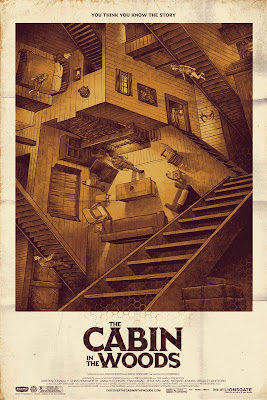 So I saw The Cabin in the Woods.  This is very notable because I shy away from any kind of horror-type film but because I was also promised by people who had seen the film that this wasn't a typical horror film and it would be a shame if I missed out on it.  So I gathered my courage to watch it and what do you know? It wasn't as scary as I imagined it in my mind (it never is) and I actually enjoyed it quite a bit.

The film is about that requisite yet ominous trip to the cabin in the woods by five friends, Jules (Anna Hutchison), Curt (Chris Hemsworth), Marty (Fran Kranz), Holden (Jesse Williams) and Dana (Kristen Connolly).  It becomes fairly obvious that these friends aren't any different than the typical subjects of any such genre. They are categorized into the whore, the athlete, the fool, the scholar and the virgin.

But they are typecast into this not by design but necessity of how these films are supposed to act.  But they weren't this way until they came into the cabin in the woods.  Because once you come into the arena, all bets are off.  This really reminded me of a Hunger Games-type of scenario with a pair of middlemen controlling the outcome.

A bit of a spoiler alert, although this is revealed from virtually the opening scene, this isn't your ordinary cabin.  This is a full-blown operation to save humanity.  It turns out that it's up to Japan and USA to save the world and the fate of the world lies in the sacrifice of these five youth.  So we have to wait and watch the inevitable as it is in any such film and take a look at how they meet their fate.

But The Cabin in the Woods takes an entirely new approach to this by alternating paying homage and poking fun at the slasher/horror/supernatural films that came before it.  The whole operation set in Japan, the whiteboard of doom, and the banter between Sitterson (Richard Jenkins), Hadley (Bradley Whitford) and Lin (Amy Acker) can be classically only found in a Joss Whedon script.

And the sacrificial lambs do their best not to just lay down and meet their doom.  They fight against it with all their might.  The dumb athlete is not just stupid, he's a sociology major.  The scholar who suddenly dons glasses and can read Latin is also in college on a football scholarship.  The "virgin" is having an affair with her professor.  My favorite of the bunch, the fool might be the wisest one of them all.

But the Ancient Ones must be appeased, a sacrifice must be given and there is a sequence towards the end that is so madcap, so fearless, so completely out there (in a good way) that you know that people will be talking about it after.  How did they manage to pull it off? I don't want to ruin for people who haven't yet seen the film but you know when you see a murderous unicorn (yes, unicorn), you've really seen it all.

This film was made in 2009 when Hemsworth was at his pre-Thor, pre-Avengers fame and the rest of the actors are known by their TV work more than films roles.  The cast, the script and the chances taken by this film to be unique are the best reasons to watch it.  You'll go around recommending it to your friends. You'll see.  I already have.