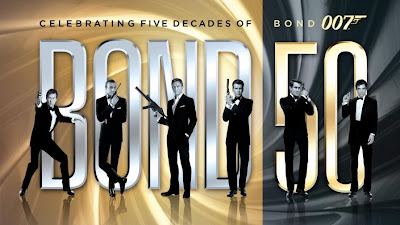 22 films with one more on the way this November. 5 distinctive and different Bonds.  Over 50 Bond girls and after 12 directors' visions, we have finally arrived at 50 years of James Bond, Agent 007, member of his Majesty's secret service.  Although not so secret anymore, he just escorted the Queen to this year's Olympics in front of half the world.  Great undercover work there.

With so many films to chose from (both good and bad), you'll always find people have strange favorites and very strong personal favorites.  Everyone agrees that Sean Connery (the first actor to play Bond) is a sentimental favorite but there is always a healthy debate as to who is the best Bond.  I like the franchise but I'm not such a devoted fan as many so I'm really pleased with the current Bond Daniel Craig and his portrayal.  Overall though, I tend to mix up the parodies and the real films together that makes for confusing recall of actual facts.  I'm working on fixing that by watching some of the older films.

The newest Bond film, number 23, Skyfall will be directed by Sam Mendes, a newcomer to the franchise.  But a stellar cast in Javier Bardem as the main villain along with Ralph Fiennes, Naomie Harris, Ben Whishaw and Judi Dench back as M looks to carry forward the Bond name into the new age.  After the outstanding Bourne trilogy with Matt Damon, the Bond franchise needed to up its game although many fans seems to prefer the older films to this gritty, realist direction the newer films are taking.

What do you think? Who's your favorite Bond and does everyone like Daniel Craig as James Bond?  It's been six years already.
Posted by Sonal at 11:45 PM