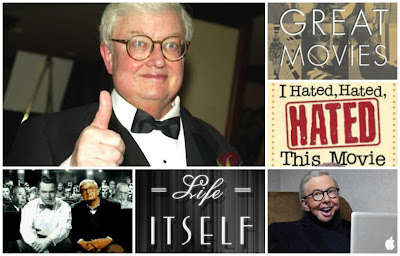 In a film released this year, Stand Up Guys, Al Pacino playing a character named Val says: They say we die twice. Once when the breath leaves our body, and once when the last person we know says our name. Film critic and author Roger Ebert who passed away on April 4th 2013 leaves behind such a legacy that his name will live on in the annals of film history and criticism.

I discovered Ebert’s film review show way back in the ‘90s when ‘Siskel & Ebert’ used to play on Channel 7 on the weekends and I instantly loved it. These two film critics, Ebert and Gene Siskel would argue passionately about films and how much they liked or disliked a film, it was either ‘thumbs up’ or ‘thumbs down’. The show fuelled my obsession with the Oscars with their discussions and their own picks and I tuned in religiously every Oscar season.

It wasn't until I went to college and saw the old classics in film studies classes that I finally understood what he was talking about, watching films through screenings instead of DVDs. I got to experience movies like Hitchcock's Shadow of a Doubt, comedies like Bringing Up Baby and His Girl Friday and all-time greats like Rashomon, Breathless and Citizen Kane which changed my life and approach to films. In fact, listening to Ebert's commentary on Rashomon (available on the Criterion edition) adds another layer to trying to understand Rashomon.

I looked forward reading his reviews every Friday, now through my inbox with his newsletter. Ebert wrote lengthy insightful reviews and usually revealed an extra tidbit about the film, director or its cast that you wouldn't find elsewhere. I always liked to think they gave his reviews an extra special touch and gave it that personal connection. When he championed certain films, you really felt his passion for them. Even his reviews of bad films were hilarious, it takes a special skill to put into words how much you really hated, hated a film. And Roger had whole books on them!

But he was also gracious to admit where he was wrong (see Brown Bunny) and brought up intriguing debates from the movies he reviewed and expanded those further on his blog. Reading about what he thought of world events or his personal opinion was both fascinating and educational. I often read his reviews after most films that I watch, it helps me understand the film better and in my home, we usually pick films to watch mostly if Roger liked them.

The first film critic to win a Pulitzer Prize in 1975, he eagerly embraced new technology and was even awarded the 2010 Person of the Year at the Webbys and had over 800,000 followers on Twitter. He was a film critic at the Chicago Sun-Times for 46 years and regularly saw over 200 films a year and attended numerous film festivals (as much as his health allowed after he was diagnosed with cancer in 2006). How many 70-year-olds can you say that about?

Only two days before, he stated in his last blog post that he would be taking ‘a leave of presence’ and would ‘’be able at last to do what I've always fantasized about doing: reviewing only the movies I want to review.” I’d like to think he’s doing that in heaven.

I don’t know what I will do next Friday when I know for sure there will be no more reviews by him. I am going to miss his literary voice so very much and will forever think of him every time I watch a new film and wonder, ‘What would Roger say?’. Goodbye, Roger Ebert and thank you for your insights, recommendations and movie memories and for nurturing my love of the movies.
Posted by Sonal at 10:29 PM