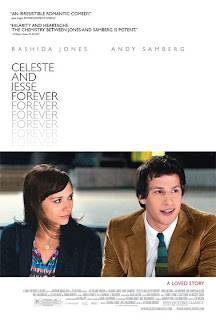 Is there ever such a thing as "the perfect breakup"? Celeste and Jesse seem to think so.  They are best friends, constantly together and yet separated and in the process of a divorce.

Their friends think it's weird for them to act as if nothing is the matter and continue on in their lives as before.  But of course things do not remain this way for long.  Celeste (Rashida Jones), a trend forecaster, and Jesse (Andy Samberg), an illustrator with no real direction, must move ahead from one another.  Because sometimes your best friend, the one you'll love forever is also the person turns out to be wrong for you as well.

Celeste and Jesse Forever is an interesting take on modern relationships in which the Facebook mantra 'It's complicated' is never more evident.  And you know it's going to end in heartbreak for both of them.  The answer is never clear.  Celeste is driven, Jesse is not; they are the type of people who instinctively know each others' moods, happy or sad.   But as things are not working out, they decide to separate.

They date other people and Celeste especially tries to show that she's getting over Jesse.  But until she comes clean with herself and realize that one can never be right all the time.  At some point you do have to let things go.  One connection especially with Paul played by Chris Messina (last seen being adorably grumpy on The Mindy Project) proves to Celeste that life does go on.

Jesse too decides to pick up his own life and take a few steps into becoming a real man.  It may be what Celeste has always wanted but it's too late for the both of them now.  It's heartbreaking to watch. This isn't your typical rom-com where things get neatly tied up in a happy ending but a reflection of how relationships now work in this modern era.

The lead actors show their character's vulnerabilities well and it's refreshing to see Samberg attempting something outside the usual route and kudos to Jones and McCormack on a fine first script.  Celeste and Jesse Forever shows a breakup in all its painful glory.

Directed by Lee Toland Krieger; Written by Rashida Jones and Will McCormack;Cinematography by David Lanzenberg; Edited by Yana Gorskaya; Music by Zach Cowie and Sunny Levine.