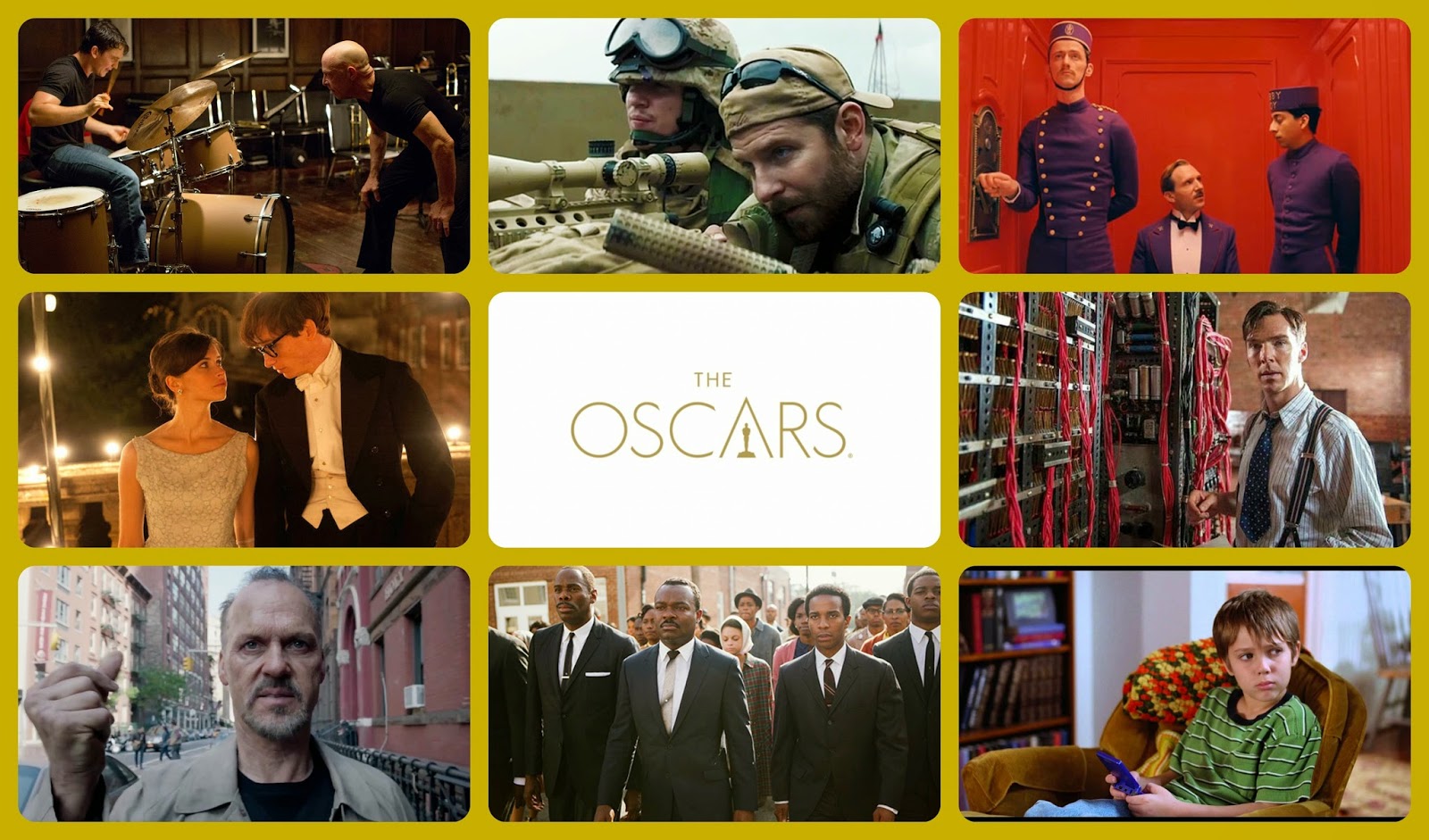 It's the most wonderful time of the year, it's time for the Oscar nominations! The noms this year were announced by directors JJ Abrams and Alfonso Cuaron and Chris Pine and Academy President Cheryl Isaacs Boone in a slightly different manner.  This time, not everyone got the shaft, every nomination was announced live in two segments. As usual they were surprises, snubs and eventual celebrations as everyone gathered to laud the best of a year gone by. The full list of nominations with my reactions below:

My take: Well, well, well, now I'd say we have ourselves an Oscar race. Although with only 8 nominees, there are some movies that missing from the race. Most notably, Gone Girl and Wild, both of which featured female leads. Any surprises as why they're missing from the list? Guardians of the Galaxy was another crowd pleaser this past year, a good candidate of why popular films also deserve to be part of the conversation. I'm guessing Christopher Nolan's Interstellar, another big blockbuster, was just too much to process for the Academy voters.  And just because animated features have their own category, it doesn't mean they can't be considered for best picture. Without any competition from Pixar, DreamWorks, Disney and Warner Bros' The LEGO Movie all brought their A-game, but it wasn't enough.  Onto the actual nominees, American Sniper, Birdman and The Grand Budapest Hotel are giving Boyhood tough competition here. Boyhood only has 6 total nominations compared to Birdman and The Grand Budapest Hotel's 9 each. Even The Imitation Game has 8 noms. Eventually, I do think that Boyhood will walk away with the top prize.

My take: The big takeaway in this category is that Bradley Cooper is a three-time nominee against four first time nominees. That's right, Cooper has scored his nominations for three straight years. Impressive indeed! All the first-timers are completely deserving of their nominations (Yay Benedict!), though I wish Miles Teller (Whiplash), Jake Gyllenhaal (Nightcrawler) or David Oyelowo (Selma) would have gotten some recognition as well


Robert Duvall in The Judge
Ethan Hawke in Boyhood
Edward Norton in Birdman or (The Unexpected Virtue of Ignorance)
Mark Ruffalo in Foxcatcher
J.K. Simmons in Whiplash

My take: How did Robert Duvall manage to sneak in? I had seen some critics correctly predicting his nomination but didn't take it seriously. Never assume in an Oscar race. J.K. Simmons has this locked down tight, but I expect Edward Norton to give him a run for his money. Ethan Hawke in Boyhood was guaranteed and I loved that Mark Ruffalo got a nom for Foxcatcher, his Dave Schulz is understated and sincere. Ruffalo's had a good 2014.


PERFORMANCE BY AN ACTRESS IN A LEADING ROLE


Marion Cotillard in Two Days, One Night
Felicity Jones in The Theory of Everything
Julianne Moore in Still Alice
Rosamund Pike in Gone Girl
Reese Witherspoon in Wild

My take: Is this year that Julianne Moore is finally rewarded for her long career and outstanding work in almost every film she's in?  I certainly hope so. Gone Girl's Rosemund Pike received the film's lone nomination for her role. She's amazing in it (pun intended), one of my favorite performances of the past year.  I haven't see most of these performances yet except Felicity Jones in The Theory of Everything, a statement I hope to rectify soon. There was a lot of talk about Jennifer Aniston breaking through with her work in Cake but she was snubbed this year.

My take: The incomparable Meryl Streep makes history once again with her 19th nomination (the most of any actor) and before I begrudge her nomination, she really was great in Into the Woods. Keira Knightley returns with her second nomination this time in the supporting category.  Laura Dern, too, earns her second nomination after 23 years! She was last nominated for Rambling Rose in 1991. Emma Stone and Patricia Arquette are both first-timers here but I don't think anyone can beat Arqueette this year.

My take: Holy Snub, Batman! The biggest shock from the nominations is the exclusion of The LEGO Movie from this category. It was a slam dunk to many. Now, it looks like How to Train Your Dragon 2 is leading favorite. And after the sad news from Studio Ghibli that there would be no more feature films, it's wonderful to see Isao Takahata's The Tale of the Princess Kaguya here. Been hear nothing but praise since it released.  This coming on the heels of Hayao Miyazaki's honorary Oscar at the Governor's Awards is bittersweet.

My take: I've only seen two films in this category and already I can tell that Roger Deakins isn't going to be the favorite here. This makes me sad. I need to finish watching the rest of the nominees, especially looking forward to seeing Ida.

My take: All period films nominated here no big surprise.  Really hope The Grand Budapest Hotel wins. Every one in the cast of the film had such an eclectic look.

My take: The biggest surprise here is director Benett Miller's nomination.  He was previously nominated for his first film Capote (2005). Wes Anderson receives his fourth nomination but his first as best director. Morten Tyldum also gets his first best director nomination for his first English film for The Imitation Game. The real competition is between Alejandro G. Iñárritu and Richard Linklater and we all know which way the majority is leaning. Big snubs here were David Fincher for Gone Girl and Ava DuVernay for Selma. Real missed opportunities here.

My take: I was surprised to see the acclaimed documentry, Life Itself, on Roger Ebert not make the cut.  But the buzz in the documentary world has been mostly about CitizenFour and Virunga. I have go back and do some research on the rest of the nominees.

My take: It's homework time on these shorts!

My take: Believe it or not, this is my favorite category at the Oscars.  What ties a movie together is the editing and sets it apart from being just a film and takes it to the great film.  That said, I'm disappointed that Gone Girl isn't here. I'd love to see The Grand Budapest Hotel or Whiplash win here but something tells me Boyhood will win.

My take: This is embarrassing, I haven't even one of the films here. Time to rectify that!


ACHIEVEMENT IN MAKEUP AND HAIRSTYLING

My take: This is actually a tough category.  Steve Carell's look in Foxcatcher is the most striking but the aliens of Guardians of the Galaxy vs the cast of characters in The Grand Budapest Hotel (for Tilda Swinton alone!) is the real competition.

My take: My second favorite category at the Oscars.  Pereninal favorites Hans Zimmer and this year a double nominee Alexander Desplat were expected but I have a feeling that the front runner is Jóhann Jóhannsson with his score for The Theory of Everything. It truly felt incandescent.

My take: How do you take a catchy song like 'Everything is Awesome' and turn into a downer? You don't nominate the film for best animated feature. *facepalm*  On the other end of the spectrum, there's Glory from Selma with the film's only other nomination.  I loved 'Lost Stars' from Begin Again and I'm kinda rooting for it, secretly hoping that Adam Levine will sing it at Oscar night.

My take:  Interstellar makes an appearance here with one of its few nominations (a small win for the contemporary films) but for me, it's The Grand Budapest Hotel all the way.  That powder pink hotel is forever etched in my brain (in a good way!).

My take: I have woefully neglected the animated shorts this past year. I definitely should mend that soon.

My take: Time to do some major homework. I don't recognize any of the shorts here.

My take: Great to see Interstellar here with its deliberate choice of silence mixed into the film's soundtrack.  Something tells me that American Sniper and Birdman are the favorites in the sound categories here.

My take: Love that Whiplash got nominated here. Watch the film to see how cleverly it weaved the music into the narrative. Really hoping that it will eventually win.

My take: The only time Hollywood blockbusters (all of them have grossed over $100 million) get any love is this category.  One of these films has an ace up its sleeve called Andy Serkis. Who do you think will win now?


American Sniper: Written by Jason Hall
The Imitation Game: Written by Graham Moore
Inherent Vice: Written for the screen by Paul Thomas Anderson
The Theory of Everything: Screenplay by Anthony McCarten
Whiplash: Written by Damien Chazelle

My take: Not seeing Gillian Flynn's name here for Gone Girl really hurts. The film was textbook adaption done right, maybe because Flynn adapted her own book. I tell myself that even Citizen Kane didn't win any Oscars and move on.  For me, the clear cut winner now is Damien Chazelle's screenplay for Whiplash.

My take: Once again, this one's between The Grand Budapest Hotel and Birdman. I wonder if having so many screenwriters will hurt the film's chances. Most of the previous winners have been solo writers.

The 87th annual Oscar awards, hosted by Neil Patrick Harris, will be given out on February 22, 2015.