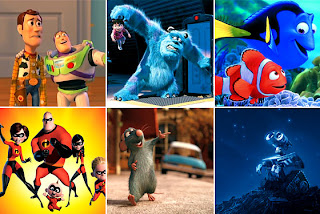 It's been 25 years since Pixar launched its first short and has now transformed itself into a bonafide studio and success story to behold.  They have told numerous stories, both long and short, that have enchanted and touched us.  I can't imagine what might have happened if that first ever Luxo Jr short was never made.  I myself have been much inspired by Pixar and their pursuit of excellence.  Pixar's films always rank as some of the best films ever made on many critics and regular movie fans top ten lists.  As they do on mine, so here are my favorite Pixar films.

1) Finding Nemo: I loved Disney's 2D animated films all throughout my childhood but Finding Nemo was the first ever animated film that truly moved me and I can watch over and over again without getting tired.  The story of a father trying to find his lost son is not a new tale but set in an underwater adventure, this film had everything.  Characters to root for, amazing underwater locales and some very funny fish comedy.  I think everyone who owned a fish tank took a good look at their seemingly placid fish.  And there's the music, til today, if I hear Thomas Newman's score of Finding Nemo, I get a little choked up.


2) Wall-E: Another Andrew Stanton film, I think he might be my favorite director amongst the bunch.  Wall-E is full of heart so much so that you can't help but root for him and his quest for love.  But the underlying theme of Wall-E is not just about the scrappy underdog; it's an environmental film with a message one that children need to start learning at an early age.  Wall-E will always remain my sentimental favorite.

3) Ratatouille: This one's a masterpiece, an animated feature film that is truly underrated.  The film has so many layers, it's all about believing in yourself and finding the inner courage to fight for your dreams while it's also about the culinary arts which have never been featured so sumptuously in an animated film.  It's also about the unlikely friendship between a sous chef and a rat who dares to dream above his station.  Ratatouille is one for the ages.

4) Up: What do an old man, an overenthusiastic Boy scout and a lovable dog who can speak all have in common?  They make an unlikely family of sorts in the adventurous Up which takes us to the majestic waterfalls and mountains of South America in search of a bird that may or may not exist.  Up was funny, emotional and made us all believe that houses can fly with the help of balloons.

5) Toy Story 2: Everyone's favorite Toy Story flick is usually the first (for introducing all the characters we know and love) or the most recent one (clever, charming with a most satisfying ending) but I will always prefer the middle child, Toy Story 2.  This one brought us back to the world of the toys yet again but showed us their fears of being cast aside, a fear that anyone can have.  It was first time that I've cried in an animated movie, especially when the song, "When She Loved Me" showed the very touching montage of Jessie the cowgirl's backstory.  I dare you not to be moved by that sequence!

1) The Incredibles: A humorous and extremely insightful take on the modern American family, this was another Brad Bird masterpiece.  The adults appreciated this film much more than children ever would and it showed the world that maybe animated films weren't just for kids anymore.  My personal favorite scene in this movie is down below.  In the end, aren't we all just waiting for something amazing to happen?  Thank you, Pixar, for giving us just that.

2) A Bug's Life: Watching this movie, I realized that computer animated films were going to become "the" thing and I loved it.  Toy Story wasn't just a one-off thing and this was going to be the future and still is.