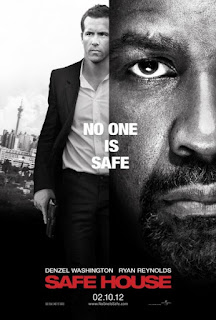 The last Denzel Washington film I saw was Unstoppable and it got me thinking, he's really settled himself into these kinds of mid-level roles in what feels like straight to DVD movies.  Safe House did open in the theaters but it feels right at home in your living room.

The film is set in Cape Town, South Africa where a relative newbie CIA agent Matt Weston (Ryan Reynolds) has been operating a safe house all by his lonesome for the past twelve months.  He has a lovely French girlfriend Ana (Nora Amezeder) who he lies to about his day job and background.  What he really wants in life is to move up the totem pole of the CIA to finally become a case worker.  One of his seniors, Agent David Barlow(Brendan Gleeson) assures him with hard work and dedication, he'll surely get there.

In another part of Cape Town, a shady deal is being done in between a former-CIA-agent-turned traitor Tobin Frost (Denzel Washington) and a MI6 Agent Alec Wade (Liam Cunningham).  A microchip containing potentially damaging information is released and so as that happens, it begins.  All of a sudden, these thugs emerge from the crowd and begin to pursue Frost.  He tries to escape but the MI6 Agent Wade is killed and then Frost has nowhere else to escape but the American consulate.  He goes in and surrenders.

Frost's acquiescence arouses the suspicion of everyone in the CIA.  Why he has come back now?  What's he got? And most importantly, what are we going to do?  First things first, they decide to send him to Weston's safe house so a team can arrive there and interrogate him.  Nine men bring Frost to the safe house but once they settle in to begin to question Frost, they are ambushed by those same thugs chasing Frost from the beginning of the film.

What does newbie Matt do?  Only he manages to survive and take Frost out the back door as he is now "his responsibility".  A car chase ensues.  Matt has to deliver Frost to another safe house but not yet.  Not before Frost starts to play some mind games with the youngster and start to plant some seeds of doubt into his head about his role in this whole affair.

The best thing about Safe House is the setting.  By putting the action in South Africa, we are treated to the same Hollywood chase and fight scenes but this time with some new venues.  We are shown the downtown Cape Town, the Metrorail and the Cape Town Stadium and Langa Township that reminded me of District 9 as locations where Frost tries to escape from Matt.  The rest of the film is pure Hollywood routine as both Frost and Matt who is actually after that dangerous file that Frost possesses. It could even be someone in the CIA!

Safe House is entertaining enough for the action sequences but once it's over you'll realize there's nothing really spectacular that's going to make it stand out from the rest of the action thrillers out there.  But it's become what we expect from the latest Denzel Washington release, a DVD watch only.