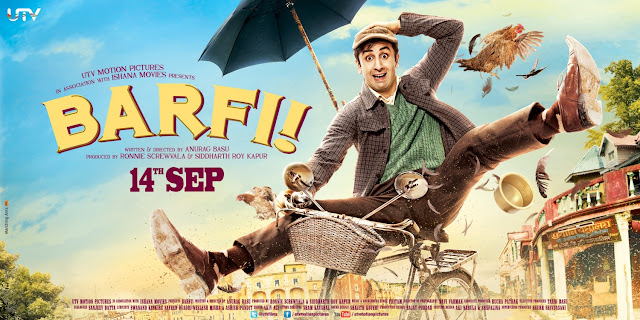 I missed this film when it initially released in theaters but finally watched it last month. There's no doubt that Ranbir Kapoor is one of the finest actors in India presently.  His portrayal of Barfi is incredibly sweet and selfless.  Barfi is a devil-may-care young man who lives life to the fullest in 1970s Darjeeling.  He also happens to be deaf and mute but doesn't let that get in his way.  Enter Shruti (Ileana D'Cruz), a young woman vacationing before her engagement.  Barfi and Shruti fall in love but he realizes that her family won't accept him so he gives her up.  Eventually an old childhood friend Jhilmil (Priyanka Chopra) reappears in his life and he gets involved in some hilarious and madcap schemes all the way to Calcutta.  Barfi then has to fight for reunite with the love of his life.

The film was India's submission for the foreign film category at the 2013 Oscars and while it is entertaining and endearing, at places it gets over long and confusing with multiple flashbacks.  Ranbir Kapoor is the main reason to watch the film as he will bring to mind some of the antics of silent movie comedy actors like Charlie Chaplin and Buster Keaton. Barfi! liberally 'borrows' scene inspirations from movies like The Notebook and Singin' in the Rain. If you've seen those movies, it might dampen your experience, knowing what's coming next.