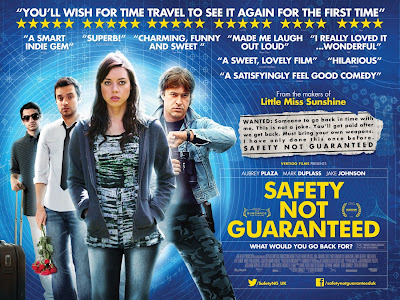 I have a strange affinity for time travel films.  It doesn't have to be overtly about them but if it's woven neatly and smartly in any story, I'm sold. Which is why it was such a pleasure to watch Safety Not Guaranteed, one of the most original and sweetest films I've seen this year.  Jeff (Jake Johnson) pitches an idea at Seattle magazine to find out the story behind an classified ad that reads: Wanted - Someone to go back in time with me. This is not a joke. You'll get paid after we get back. Must bring your own weapons. I have only done this once before. Safety Not Guaranteed. I don't know about you, but I would be completely intrigued too.

Jake takes along two interns, Darius (Aubrey Plaza) and Arnau (Karan Soni) with him to track down the person who wrote the ad.  It turns out that Jake has a hidden agenda in pursuing this story, he used to summer when he was in high school in the town of Ocean View and was in love with a local girl. He now feels she was the one that got away.  Darius takes the lead on the story, initiating contact with Kenneth (Mark Duplass) who posted the ad.

What follows next is both unexpected and charming in the twists and turns the story takes. The characters are all well-written. Jake is trying to capture his lost youth, Arnau is too busy worrying about his future to enjoy his present and Darius is getting over some painful memories of her past. Paranoid Kenneth may be the only one who is actually quite sure what his path is.  Director Colin Trevorrow and screenwriter Derek Connolly turn in sharp, funny and engaging film that I'm adding to my list of best films that I've seen this year.