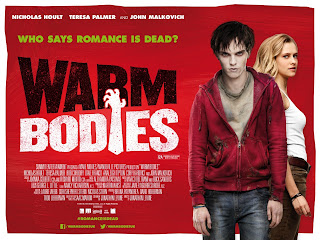 You’ve heard of rom-coms of course, but Warm Bodies was a first for me, a zom rom-com.  Yes, even zombies can feel  remorse and fall in love. I know that now after watching this film.  It shows us the other side of the equation, a film from the zombie’s perspective.  It was about time.  This is a refreshing change from the rest of the movies in which a zombie is just part of a nameless lumbering, unthinking mass army.

Nicholas Hoult is awkward yet adorable as the confused ‘R’, a corpse on his way to becoming a zombie.  In the film’s universe, there are three categories, humans, corpses and Bonies who are literally feral skeletons who are out for blood. R’s life in limbo is dramatically altered one day when he meets Julie (Theresa Palmer) during an encounter of humans vs. corpses.  He saves her from being eaten and brings her back to his home (an abandoned airplane) where like Wall-E, he hoards objects and knick-knacks that fascinate him.  He, of course, is slowly falling in love with her and Julie comes to discover that not all corpses have lost their humanity.

The film is a clever take on the classic tale of Shakespeare’s star-crossed romance.  It’s set in a dystopian world where the zombie epidemic has left very few human survivors and the few that are left alive are quarantined off.  Julie’s father Colonel Grigio (John Malkovich) is the paranoid and overprotective leader of the few that remain. Julie’s and R’s friends Nora (Analeigh Tipton) and M (Rob Corddry) are more than just the clichéd best friend even as they add to the comic relief in the film.  R’s narration of his inner thoughts is witty and ultimately touching.  The film also has a terrific soundtrack.  I really enjoyed this new take on the rom-coms. I say, bring it on! I’m looking at you now, Pride and Prejudice and Zombies.