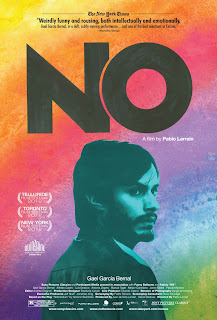 One of this year’s nominees of best foreign film from Chile at the Oscars, No is one of those based-on-real-life events that seems scripted. Except it isn’t.  This slice of history from a tumultuous period of Chilean history when the referendum to either retain or boot General Pinochet from power came down to two simple words: Yes or No. Each side is given 15 minutes of TV air time for nearly a month to present their view. A vote for yes means another 8 years of Pinochet.

Rene Saavedra (Gael Garcia Bernal), an adman who is considered one of the best in his field, is approached by the ‘No’ campaign to helm it.  He is hesitant at first but gets pulled into the challenge when he sees what they have. The campaign is made up of real testimonies which are harsh and somber.  Saavedra’s idea is a bit different.  He wants to sell democracy as a product and not everyone is on board with it.

Filming secretly as not to reveal the identities of the ‘No’ supporters and without revealing their campaign, they come up with an ode to happiness complete with a logo featuring a rainbow behind the word no.  There’s even a catchy song which you will be humming by the end of the film.  The ‘Yes’ campaign doesn’t take this lying down and trying to create similar ads to attack them.  Renee, a single father, is threatened and worries for the safety of his activist ex-wife.

The ‘No’ campaign slowly gains momentum as the word on the street begins to shift in their favour. In the beginning, the ‘No’ campaign just wants the world to be informed of the truth.  But as the days pass, they begin to think that they can actually win.  The film is shot on low definition 80s video so as to seamlessly blend with the actual footage of the period and it’s a decision that really sells home the idea of history coming to life.

Like eventual Best Picture winner Argo, I’m sure No too has many embellishments and exaggerations for the sake of film but the fact of the matter remains that the ad campaign was also an important part of the movement that allowed for democratic elections.  Director Pablo Lorrain has made a wonderfully engaging  film that will make you want to check out the real story behind the big vote. Make sure you say yes to No.