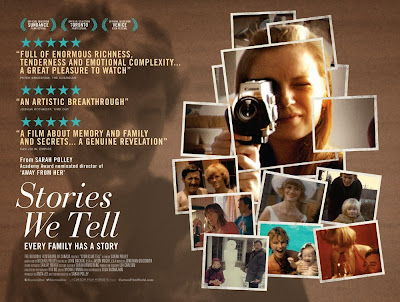 What happens when a family secret is revealed years later? What is the impact on the family members left to pick up the pieces?  Sarah Polley's deeply personal documentary, Stories We Tell, deals with the aftermath of a family secret involving her mother.

Stories We Tell is devastatingly honest and direct in the emotions it exposes. Polley interviews her older siblings and her father about her mother, actress Diane Polley who passed away of cancer when Sarah was 11.  Through family photos and videos, she reveals her parents' love story and married life, giving us a glimpse of her mother's lively personality.  Friends and co-workers also interviewed as they recollect their memories.

But this unique documentary offers a different perspective on the events of years past as Polley's father Michael narrates those days with his own journals and letters giving insight into his thoughts and views.  We see Polley guide him through the narration in the studio.  Polley's siblings also introspect on their parents' marriage, what they might have been going through at that time and what their feelings are on it now.

Certain key moments are also recreated using actors.  Polley has this curiosity about these events that have shaped her own life and while it might seem intrusive at times, it works a process for her understanding and dealing with the secret.  What is the secret though? I feel it's unfair to reveal it here and leave it up to you to discover it. It's testament to the fact that Polley is such a good instinctive director that sometimes she allows the scenes to speak for themselves.

Sarah Polley, who is a fine actress in her own right, has over the last couple of years emerged with as a filmmaker with a unique voice.  She has also made Away from Her (2006) and Take This Waltz (2011) with strong female characters in the lead.  Whatever it is acting or directing, I look forward to a film if Polley is in it. I thought about Stories We Tell long after I had seen it. It's one of the best personal documentaries I have seen.