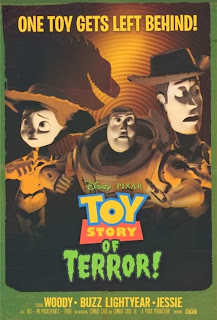 Toy Story of Terror!, Pixar's first television special goes forward from the feature films and shorts in the Toy Story universe. This time around, the toys are on the road with their owner Bonnie, watching scary films on the DVD player in the car when a flat tire causes them to stay overnight at the Sleep Well motel.

The gang is spooked already with Pricklepants (voiced by Timothy Dalton) ominously cluing in the toys of the impending doom that faces characters that get stranded overnight in any story.  First, Mr. Potato Head (voiced by Don Rickles) disappears and the toys have go after him. Then one by one, they too are taken by a mysterious being until Jessie (voiced by Joan Cusack) is the only toy left standing.

She comes across Combat Carl (voiced by Carl Weathers), who is all too aware of what lays ahead for the toys who have the misfortune to stay at the motel.  I think he's my favorite addition to the Toy Story universe, he's totally focused on his mission and loves referring to himself in the third person. And don't get me started on Combat Carl Jr. Just. Too. Adorable.

But the character who gets shine (and rightly so) is Jessie who has to overcome her greatest fear of being put away forever in a box.  It was a nice touch referring back to Jessie's storyline from Toy Story 2 and give a nice emotional moment amidst the short feature. Woody (voiced by Tom Hanks) and Buzz (voiced by Tim Allen) take a backseat and put faith in Jessie to save the day.

Toy Story of Terror! has some great laugh out loud moments and features some of your favorite characters from the series as they go through the movie cliches of any horror film. All G rated of course!  It seems that these toys have an awfully hard life with the threat of being separated from the owners always hanging over their head.

But I must say I enjoyed this Halloween preview immensely and plan to watch it again and again.  And I'm putting the request out there for a short only on Combat Carl and Combat Carl Jr.  I just want him to see Billy again.  Pixar, please make that happen!