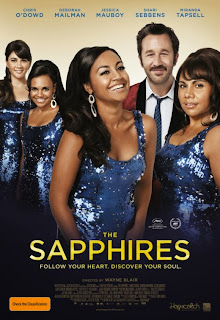 This enjoyable Australian film about an enterprising group of Aboriginal singers and sisters who toured Vietnam in the 1960s is one of those feel-good films that are "inspired" from real life events.  Based on the play, The Sapphires, by Tony Briggs, the son of one of the actual Sapphires, the film invents a key character to take the story further. In this day and age, we can call it the 'Argo-effect', heightening the story for effect onscreen.

Gail (Deborah Mailman) and Cynthia (Miranda Tapsell) audition at a local competition where they are overlooked for a white contestant.  However, struggling talent manager Dave Lovelace (Chris O'Dowd) notices their potential, especially when their youngest sister Julie (former Australian Idol runner-up Jessica Mauboy) joins them.  He thinks they have a chance to perform for the US troops in Vietnam but they need to become a proper team to go abroad.

Their estranged cousin Kay (Shari Sebbens) is the fourth part of the group and they head off to Vietnam, where they realize the stakes are quite real. They have landed in an unstable war zone.  But the Sapphires perform well at their gigs with some delightful covers of hits like 'I Heard It Through the Grapevine' and 'Who's Lovin You". There's also a romance sub-plot between Dave and Gail who bond as the caretakers of the group. Their interactions are the most memorable in the film and Chris O'Dowd particularly stands out with his infectious desire to succeed on the tour.

If you're looking for a fun feel-good film to see over the weekend, you can't go wrong with The Sapphires. It bends the truth (but then again, what film doesn't?) but it will give you a glimpse of the challenges faced the Aboriginals who lived in Australia at that time. The film shows how these particular sisters chose to be proactive and grab their future in their hands.

Directed by Wayne Blair; Based on the play by Tony Briggs, Screenplay by Keith Thompson and Tony Briggs; Cinematography by Warwick Thornton; Edited by Dany Cooper; Music by Cezary Skubizewski