Movie Review: The Kings of Summer 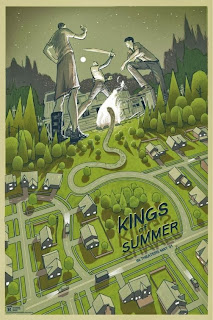 Coming of age tales usually involve a significant event in a youngster's life that changes them irrevocably.  In Joseph Toy's (Nick Robinson) case, it's his mother's death that furthers the distance between his father Frank (Nick Offerman).  To state that they don't get along is an understatement.  For example, Joe calls the police on his dad on false charges several times.

However, one summer Joe and his friend Patrick (Gabriel Basso) have had enough of their parents and their interferences in their lives.  They decide to run away and build their own house in the woods, where they will live by their own rules.  Joining them is the delightfully weird kid that exists in every town, Biaggio (Moises Arias).

But plans always sound good on paper first.  At first, being away from rules and restrictions put down on them from their parents is bliss and the boys revel in their freedom.  As the days pass, other concerns pop up, food, shelter and nature's elements all play in role in testing them.  However, the biggest test of the boys' friendship comes in another form, the affections of young woman Kelly (Erin Moriarty).

The Kings of Summer has a light take on teenagers, friendship and parental resistance. I still felt that, at the end of the film, Joe and Frank still had a lot to hash out between them. The sequences set early in the film as the boys make their jungle hideout are well-shot with great shots of nature.  Nick Robinson is fine as the likable although aimless lead character but Moises Arias' Biaggio has the best lines of the film.

I still wanted more from the film but if coming of age films interest you then The Kings of Summer has its moments of fun and friendship.