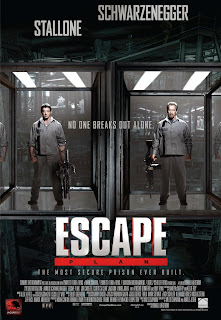 Watching Escape Plan, you might start thinking it's the 90s again with lead actors Sylvester Stallone and Arnold Schwarzenegger in their elements anew.  Two decades later, the action heroes of our childhood are back in a story of wronged men who are held in the world's most secure prison. Or so everyone thinks.

Stallone is Ray Breslin, who makes his living exposing the flaws in security systems in prisons across America. Basically, he's never met a prison he can't break out. One day, the government again mysteriously asks Breslin to be a part of a plan to test out a prison to hold the world's undesirables.  He just shrugs and agrees. This is exactly how it happens in the movie.

Members of Breslin's team, his business partner Abigail (Amy Ryan) and Hush (50 Cent) are skeptical but agree to the plan.  Honestly, I couldn't figure out what work they ever did for him anyway.  But then movie takes a turn for the better once the action shifts for towards the Tomb, the strictest prison in the world run by Warden Hobbes (Jim Caviezel).  He may be sadistic but he still makes time to mount dead butterflies in frames!

Breslin has one ally in this hellhole, Emil Rottmayer (Schwarzenegger) who seems to be in the running for the most helpful inmate ever.  Seriously, no request is ever denied.  Breslin and Rottmayer bide their time, watch the routine and layout of the prison and try to get the hell out of there.

Most people enjoy training montages but I personally love 'how-did-they-do-it?' montages. There are several of those in here as Ray attempts to break out of The Tomb and find out who wants to make sure that he never sees the light of day again.

It's fun to see Stallone and Schwarzenegger against each other onscreen and working together.  There aren't many funny moments (which is a shame) but there's a great exchange between them as they try to insult each other's intelligence.  Stallone is too stiff in his scenes but Schwarzenegger looked like he was really enjoying his second career back in the movies (and his slo-mo action shot as well!). And Caviezel is very good as the methodical but evil warden.

For fans for both the action stars, I would suggest you definitely check out Escape Plan. It very well might feel like a trip down memory lane.