First Still: Guardians of the Galaxy 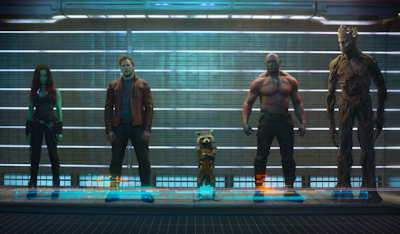 The first still from Marvel and Disney's Guardians of the Galaxy is out. The summer blockbuster hopeful is an epic space adventure that aspires to have the same connect that the Avengers team did.  If you were mystified by the end credits scene of Thor: The Dark World, it was hinting at characters and plots in Guardians of the Galaxy.  The film, directed by James Gunn (Super), features Peter Quill (Chris Pratt) who finds himself being chased by Ronan (Lee Pace) when he gets his hands on a mysterious orb.  Quill then has to team up with Rocket Raccoon (voice of Bradley Cooper), Gamora (Zoe Saldana), Drax the Destroyer (Dave Bautista) and Groot (voice of Vin Diesel).  Glenn Close, John C. Reilly and Benicio del Toro are also part of the cast.  Guardian of the Galaxy releases on August 1, 2014.

What do you think? Are the Guardians intriguing? Or you still looking ahead to the next Avengers film?
Posted by Sonal at 5:20 PM

Email ThisBlogThis!Share to TwitterShare to FacebookShare to Pinterest
Labels: Disney, Guardians of the Galaxy, Marvel