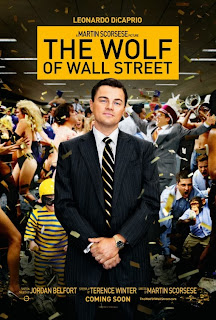 On Wall Street, you have the bulls and the bears. And then there's Jordan Belfort. He needs a whole separate category unto himself that's explained in this grand opus of greed, excess and the single-minded pursuit of riches.

Martin Scorsese and Leonardo DiCaprio's fifth collaboration together, The Wolf of Wall Street, is yet another example of ambitious moviemaking. I don't think they'd have it any other way.  DiCaprio is Jordan Belfort, a young eager stockbroker ready to do whatever it takes to rise up the corporate ladder.   His first job at a major Wall Street firm with mentor Mark Hanna (Matthew McConaughey in a too-small role) doesn't last after the epic collapse on Black Monday in 1987. However, young Jordan manages to bounce back quite neatly when he stumbles upon a scheme of selling penny stocks for higher personal profits on Long Island. He's the lone shark amongst the fishes.

Belfort sees and seizes upon the potential the opportunity that has fallen in front of him. Along with his over-enthusiastic neighbor and partner Donnie Azoff (a hysterical Jonah Hill), he recruits these inexperienced suburbanites and turns them and himself into an established company with street-cred on Wall Street.  Behind the scenes, the crazy shenanigans are afoot and gluttony of every manner, sex, drugs, alcohol and hard cash, you name it, Jordan and his cohorts have tried and thrived on them.  I doubt they could survive a single day without them.

But as they say, the higher you rise, the harder you fall. Belfort has built his company stealing from the poor and the rich and making himself and his partners wealthy.  He has no compunctions about it too which a lot of the audience might be turned off by but if not for Leonardo's superb and fearless lead performance, the film would collapse completely.  And in the hands of a lesser actors, the whole film would be off-putting.

Jonah Hill, who for the second year in row, has turned a stellar supporting performance (those pearly whites are startling, you won't be able to take your eyes off them!) with his portrayal of Belfort's right hand man.  The rest of the cast is just as good with Rob Reiner in his first acting job in 10 years, Margot Robbie as Jordan's second wife, Kyle Chandler as his nemesis from the FBI and a splendid cameo by director Spike Jonze (see if you can spot him!).

As usual, ace director Scorsese and his editor Thelma Schoonmaker continue to surprise us with their vivacity with each new film (Scorsese is 71 and Schoonmaker is 74).  I especially loved the soundtrack choices and editing cuts.  As I mentioned before, the content of the film might be off-putting or just too much for many but I suggest you watch The Wolf of Wall Street primarily for Leonardo DiCaprio, this is his one performance where everything is just laid out on the table, warts and all. Don't look away.

Directed by Martin Scorsese; Screenplay by Terence Winter; Based on the book by Jordan Belfort; Cinematography by Rodrigo Prieto; Editing by Thelma Schoonmaker