That's it. The 87th Academy Awards are over. The Oscar race is done. Alejandro G. Iñárritu's Birdman is 2014's Best Picture. How did we get here? Back in August, I thought for sure Boyhood had this in the bag. But there's this curse of the frontrunner that is becoming prevalent as years go by. If the critics hail it, the Academy is sure to have its own opinion. Therefore as you look at the best picture winners down the years, you'll notice that what was essentially the best film that year never ended up winning the big prize and sometimes it's better for it.


This year's host Neil Patrick Harris, after a solid opening musical number (and ably supported by Anna Kendrick and Jack Black), faltered in the comedy bits throughout the rest of the show. I think they forgot the part about hiring actual comedy writers to write the jokes and presenter introductions.  While part of the problem at the Golden Globes was that we didn't see Tina Fey and Amy Poehler, we kept wanting more. Here Harris was everywhere (not necessary a bad thing) but with jokes that weren't getting any laughs. It was just awkward because Neil's so winsome when he's hosted the Emmys and the Tonys. He should have just gone off script.


But getting back to the show, it was a weird night for an Oscar show. All the Best Picture nominees won at least one Oscar so no one was shut out. It was the Oprah effect. "You get an Oscar, you get an Oscar and you get an Oscar!". For once, the musical numbers for the best song nominees weren't bad. Though I don't believe the Oscars were prepared or even ready for the stage performance that was 'Everything is Awesome'. That was light years ahead of the Academy, as is evidenced by The LEGO Movie not even being nominated for Best Animated Feature.

The LEGO Movie's exclusion meant that the LEGO Oscar teased by co-director Phil Lord the day of the Oscar nominations became the most coveted statue in the Dolby Theatre. During the performance, the dancers handed them out to the celebs seated   Everyone, and I mean everyone, was happily posing with them.  Excuse me while I go Google 'How to make your own LEGO Oscar'. 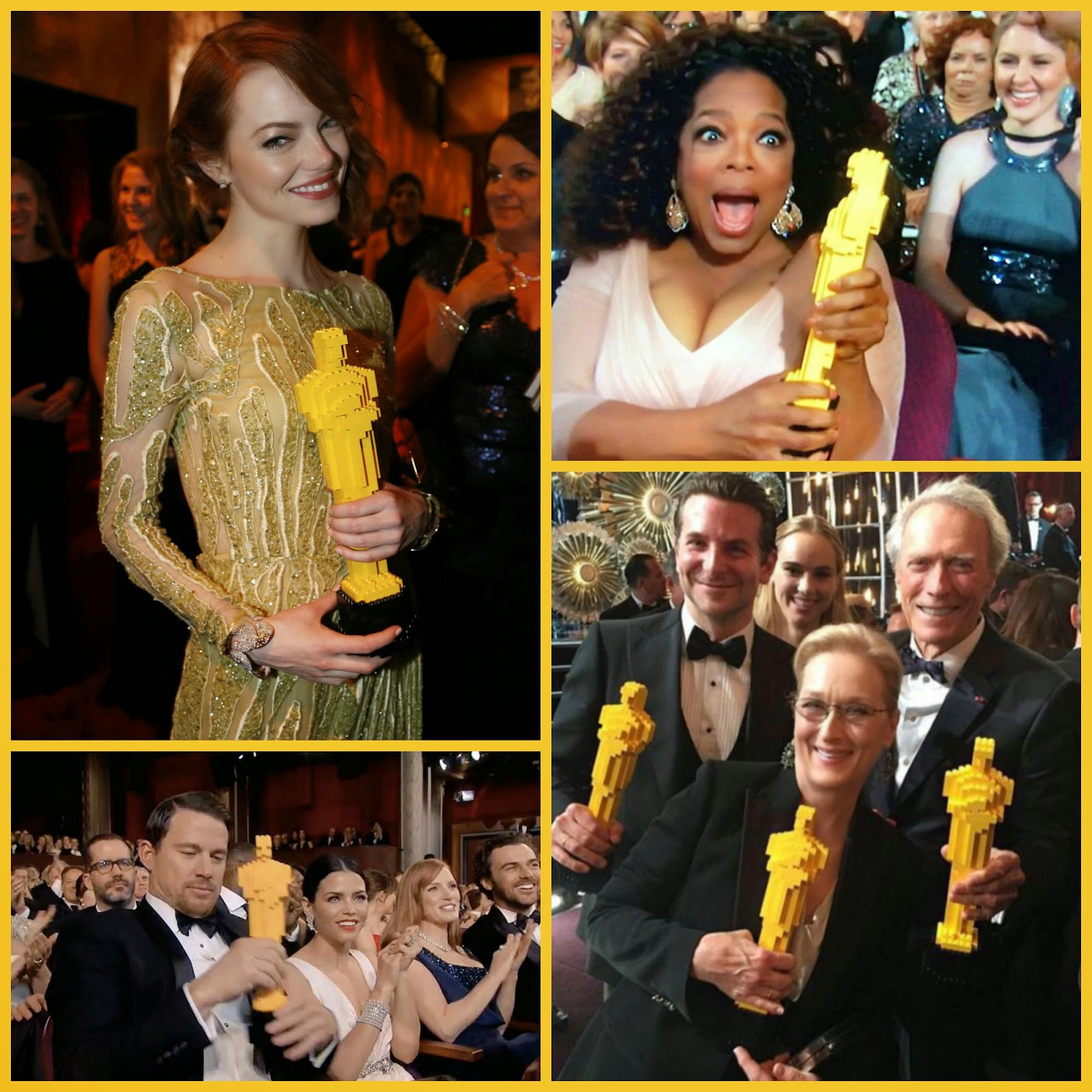 My personal picks were woefully miscalculated. I picked the nominees who I thought were going to win and was pleasantly surprised to see that who I wanted to win initially walked away with the Oscar.  Whiplash's win in editing, Interstellar's win for Double Negative's out of this world special effects and Alexandre Desplat's finally, finally winning after seven nominations, these were just a few of my hopeful picks and I'm so glad that they won.

Last night was also the night that Hollywood brought out its activism in full force. Winners like Patricia Arquette (highlighting wage equality for women), Graham Moore (in the night's most emotional speech on being different) and John Legend and Common spoke up about marching on and fighting for what they believed in. Legend and Common brought the Dolby audience to their feet with their performance of 'Glory' from Selma. David  Oyelowo and Chris Pine were moved to tears.  Both of them spoke so eloquently on what the late Dr. King's march means today and why we must continue to speak up and act on the civil rights around the world.

The night's biggest upset occurred in the Best Animated Feature category as Disney's Big Hero 6 beat out the competition (including DreamWorks' How To Train Your Dragon 2) to win the Oscar.  It was a good night for Disney Animation Studios which has regained its status as one of the top animation studios under the leadership of John Lasseter, it also won Best Animated Short for Feast.

The night also featured the battle of the Oscar winners trying to thank everyone they've ever know in 45 seconds versus that ruthless orchestra making sure they finish. Some of it was hilarious (see: Pawel Pawlikowski, the director of Ida) but sometimes orchestra, you need to chill, an Oscar moment only comes along once in a lifetime, let these people have their say.

To those who didn't win tonight, don't fret, this is not the end of the world.  Congratulations to all the winners and the nominees for their outstanding work in 2014 and let's meet back here again in a year to celebrate 2015. Good night!

PERFORMANCE BY AN ACTRESS IN A LEADING ROLE


Birdman or (The Unexpected Virtue of Ignorance): Emmanuel Lubezki
ACHIEVEMENT IN COSTUME DESIGN


Birdman or (The Unexpected Virtue of Ignorance): Alejandro G. Iñárritu